A defaced Fence raises questions of stereotyping and student relations 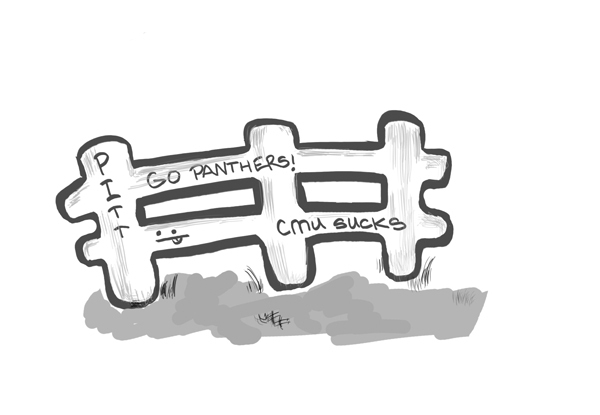 This past week, we were dismayed to see the Fence painted with University of Pittsburgh colors and statements such as “Go Panthers” and “CMU sucks.” Traditionally, the act of painting the Fence in the dead of night and then guarding it during the day has united the campus and allowed different student organizations to advertise for worthy causes and student events. The Fence has served as the giver of good news, exclaiming marriage proposals and birthday wishes. In addition, it has served as a solemn campus-wide reminder of the more serious aspects of life, mourning those who died too early and calling the community to action in the wake of national and international crises. In light of the significant messages written on the Fence over the years, we feel that anyone — Carnegie Mellon student, Pitt student, or others — must know and respect the traditions surrounding the Fence.

Initially, we were angered that one of Carnegie Mellon’s long-standing traditions was defaced in this way. However, the more we lingered on the topic, the more we realized that this act, whether it was done as a light-hearted prank or out of anger, clearly shows the lack of respect that some Carnegie Mellon and Pitt students have for one another. It is not uncommon for different campuses, especially those situated side by side, to develop rivalries with and stereotypes about each other. One would not have to look hard on our campus to find a perpetuation of these degrading stereotypes. Carnegie Mellon students and professors frequently joke about the lack of intelligence on the Pitt campus, or lament that all the attractive kids go to Pitt and get to start drinking during the middle of the week. This automatic labeling of Pitt students as stupid and lazy, or Carnegie Mellon students as anti-social and geeky, needs to stop.

As long as we continue to think this way and try to fit a whole campus into a tiny, stereotype-wrought box, instances like the defamation of the Fence will continue as well. If our campus and Pitt’s decide to put aside stereotypes and instead establish a relationship, the possibilities are endless. How many community service projects and fundraisers would be more effective and reach a greater number of people if our two universities worked together?
City wide service opportunities like Carnegie Mellon’s yearly 1000plus could be an opportunity for collaboration between our university and Pitt. Student and Greek organizations from both campuses could sign up together to participate in service projects that relate to their interests.

In this way the two campuses could strengthen their relationship and make an impact on the Pittsburgh community. Neither school can control how the other acts, but for our part, we as a student body can strive to break down stereotypes between Carnegie Mellon and Pitt and build a mutual respect that will serve both campuses well in the future.