Greek life could potentially be scrutinized due to resolution 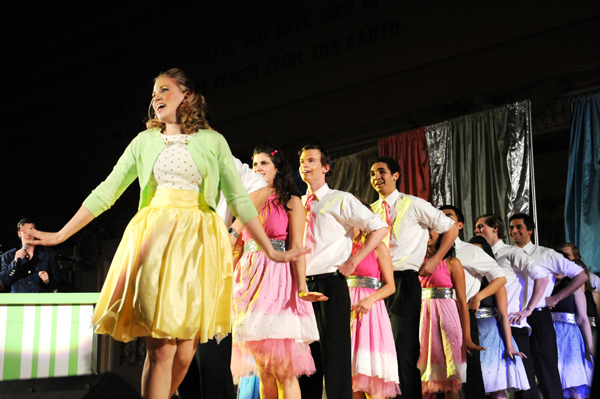 Greek Sing is an event in the Carnegie Mellon Greek community that mixes sororities and fraternities. (credit: File Photo)

Title IX, best known for its impact on high school and collegiate athletics, also has a direct effect on single-sex organizations like the Girl Scouts and the Boy Scouts, as well as fraternities and sororities. As a campus with 17 percent of the undergraduate population involved in Greek life, Carnegie Mellon is largely affected by this law.

The law states, “No person in the United States shall, on the basis of sex, be excluded from participation in, be denied the benefits of, or be subjected to discrimination under any education program or activity receiving Federal financial assistance....”

Despite the existence of Title IX, single-sex organizations like fraternities and sororities have remained intact over the years. This is due to a clause under Title IX that states, “This section shall not apply to membership practices ... of a social fraternity or social sorority which is exempt from taxation under section 501(a) of Title 26, the active membership of which consists primarily of students in attendance at an institution of higher education.”

The exclusion of social fraternities and sororities from Title IX has allowed Greek life to grow on its own terms on many collegiate campuses, but not without controversy.

“In the past, there have been challenges faced by these organizations due to men and women wanting to join groups that are specified toward the opposite sex,” said Brittani Grant, president of Carnegie Mellon’s Panhellenic Council and a junior civil and environmental engineering major.

Many colleges are finding instances of extreme intermingling between social fraternities and sororities, such as the adoption of sorority women as honorary members of Interfraternity Council (IFC) fraternities. This intermingling, which often includes these “little sisters” having voting rights during recruitment, is argued to negate the purpose of a single-sex organization.

To address this rising issue, the National Panhellenic Council (NPC) passed a resolution last October stating that Panhellenic sororities could no longer participate in fraternity recruitment. “If sororities are questioned about why they should remain single-sex organizations, this NPC resolution will show that we are taking steps to preserve the standards of the organizations,” said Monica Bebie, coordinator of Greek life at Carnegie Mellon.

By refraining from participation in fraternity recruitment, sorority women not only hope to distinguish themselves as strictly single-sex organizations, but also hope to promote values-based recruitment.

“Fraternities and sororities will always work together to support one another in their individual endeavors, but NPC wanted to make sure that new members are joining fraternities for the right reasons like the goals and values of the fraternity, not the girls that they would get to meet from being a part of the organization,” Grant said. “Although this has not been much of an issue for the Greek community on Carnegie Mellon’s campus, it is still necessary for Carnegie Mellon’s Panhellenic Council to put a resolution in place to address the specific issues regarding women and men’s recruitment.”

Some of the 1,045 of 6,020 undergraduates in fraternities and sororities at Carnegie Mellon are wondering how this resolution will directly affect them.

Grant, who is working with others in the community to put a plan of action in place, said, “I don’t have specifics of what [our campus’s] resolution will look like at the moment, but I can guarantee that something will be put in place by the end of the semester and therefore will have an effect on Panhellenic women’s involvement in fraternity recruitment in the fall.”

The resolution could mean anything from sorority women not being able to go to fraternity houses during recruitment to refraining from liking a fraternity’s rush on Facebook.

One thing is certain, however: Greek life is determined to remain as single-sex organizations.

“Historically, Greek life has been about groups coming together saying ‘we need a social outlet....’ Men started fraternities and then women wanted that opportunity too,” Bebie said. “Keeping fraternities and sororities same-sex benefits everyone because women can talk about issues as they relate to women and vice versa with men. We [Greek life] are a huge, huge value add to campus.”