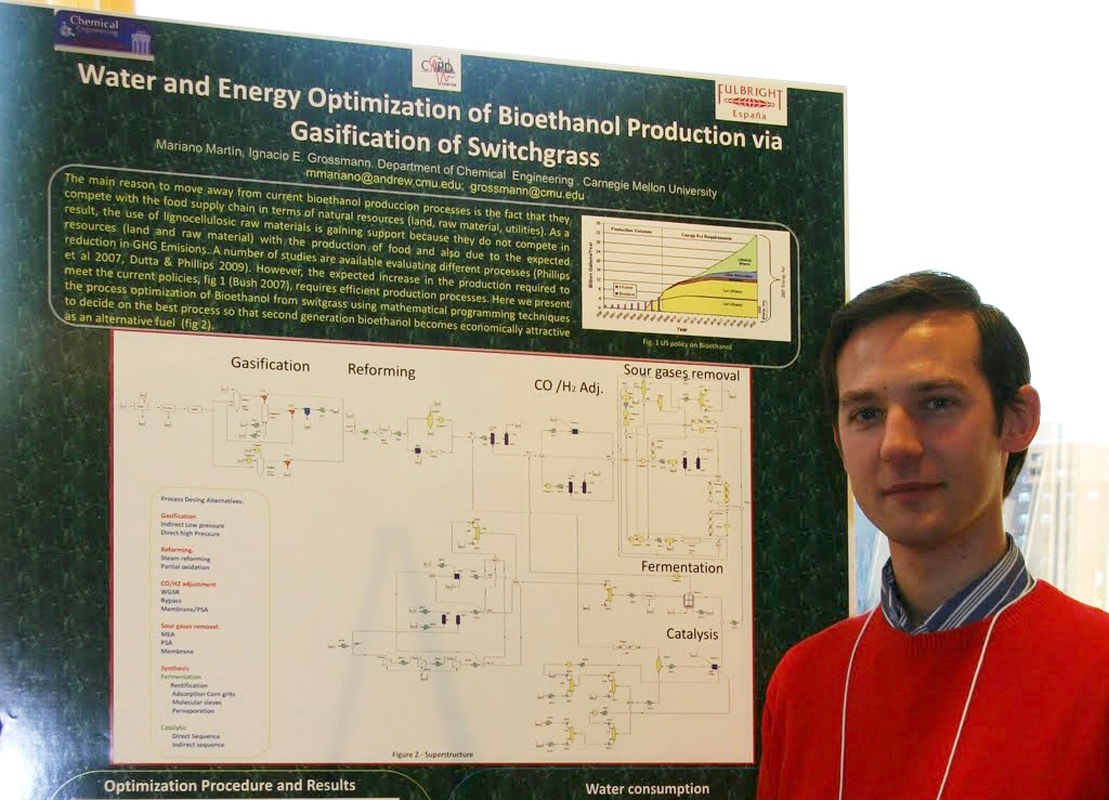 Mariano Martin, a post-doctoral researcher in the department of chemical engineering, recently presented his research on converting switchgrass to biodiesel at a Center for Advanced Process Decision-making symposium. (credit: Courtesy of Mariano Martin)

With increased demand for energy as the world population climbs over the 7 billion mark, many experts are stressing more than ever the importance of alternative and renewable energy sources. Two Carnegie Mellon researchers have honed their skills in conceptualizing an efficient system that converts switchgrass, a versatile grass that grows easily in much of the U.S., into an energy-rich biofuel.

In the past, producing fuels from other types of biomass, such as corn, has proved successful, but the process comes with unwanted impacts on prices in the food market. For example, if only a fraction of corn grown on a plot of land is being used for food while the rest is being used for biofuels, the corn for food would then be more scarce, which would increase the price of corn in the food market. Switchgrass, however, has no such impact.

“Switchgrass grows everywhere in the U.S. The yield from the ground to the biofuel is quite large without competing with the production of food, and it almost grows wild,” explained post-doctoral researcher Mariano Martin, who was the head author on the study.

In the study, which was recently accepted to the journal Industrial & Engineering Chemistry Research, Martin looked for the optimal set of processes and conditions needed to convert switchgrass into diesel fuel.

Why diesel? Martin explained: “In the U.S., diesel is not used commonly for cars, but for trucks. For example, the Carnegie Mellon shuttle runs on biodiesel. So we need a certain supply for a diesel substitute.”

The process of converting material such as switchgrass into fuel involves a few steps. First, the material goes through a process known as gasification, which involves the reaction of the material at temperatures up to 900˚C without actually burning the material. This produces a gas, known as “syngas” (short for synthetic gas), which then goes through a reforming and cleaning process that removes unwanted chemicals. Lastly, a series of chemical reactions, known as the Fischer-Tropsch process, converts the gas into liquid fuel. In the case of this particular study, the target liquid fuel is diesel.

Martin and his colleague, professor Ignacio E. Grossmann of the chemical engineering department, ran a model that evaluated a collection of alternative methods and conditions in which the conversion process should occur to optimize efficiency. The team found that indirect gasification, which involves two separated chambers, one for heating and one for producing the heat, was the best and most energy-efficient way of conducting this process. The process would also need to use steam for the reforming step.

Besides minimizing energy consumption, Martin and Grossman’s process of converting switchgrass to diesel fuel also reduced the amount of water used. “In order to be sustainable, we not only have to take care of raw material or energy consumption,” Martin explained, “but also water, because even though there has been a lot of water for some time, it is now becoming scarce and becoming another concern at the same level as energy consumption.”

Typically, Martin said, conventional crude oil-based fuel companies use between 1.5 and 2.5 gallons of water per gallon of fuel produced. The process found in this study uses well below one gallon.

Since the improved process is currently only conceptual, Martin said that more detailed design work would need to follow this study before a plant could be built to utilize this technology. He hopes that this kind of work will allow people who wish to invest in these technologies to make the best decision on which fuel-deriving processes to utilize. “So, of course, to those who are going to invest, they should check this option first,” he said.

Martin urges this type of work for the benefit of humanity into the future: “I think we have to look for more alternative sources of energy in the near future because it’s the only we can maintain our way of living.”