Is your student loan worth it? 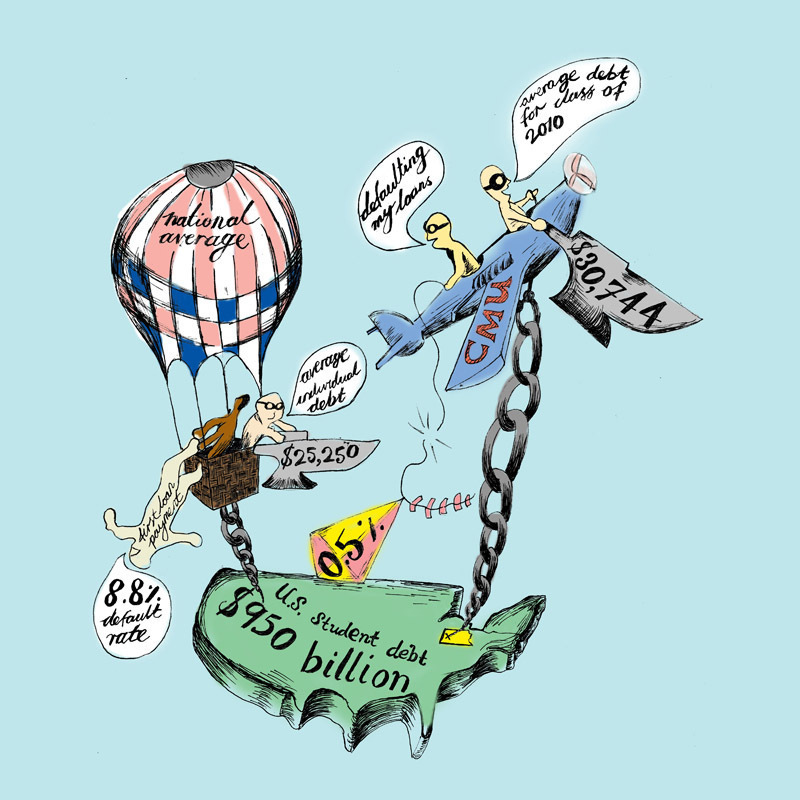 The total student loan debt in the United States is $950 billion, according to Bloomberg L.P., and the average student graduated last year with $25,250 in debt. Overall, Americans owe more in student loans than they do on their credit cards. Given these statistics, how does Carnegie Mellon stack up?

According to the College Board, the average 2010 Carnegie Mellon senior graduated with $30,744 in debt, over $5,000 more than the national average. On the other hand, it seems that Carnegie Mellon students are finding it easier to repay their loans than most Americans: While the Department of Education reports that, nationally, 8.8 percent of students whose first loan payment was due in the 2009 fiscal year (the “FY 2009 cohort”) defaulted on their loans in the 2010 fiscal year, only 0.5 percent of Carnegie Mellon’s FY 2009 cohort defaulted in that time.

“That’s a healthy statistic,” said Linda Anderson, the director of student financial aid. “We’re very fortunate. Our students take their financial obligations seriously. And the most important thing is they secure employment in their chosen field upon graduation, which is reflected in that percentage.”

According to Anderson, the average debt of the 46 percent of Carnegie Mellon students who graduated with debt in fiscal year 2011 was $29,303. She said that that figure has remained more or less steady for the past few years.

Despite the high cost of college, and of Carnegie Mellon in particular, Anderson said that she believes higher education is worth it: “I think for the great majority of our students, borrowing, taking on student loan debt is positive. They’ve made the right choices.”

Students, said Anderson, have to figure out whether a loan is the right choice for them on an individual basis.

“Did it help you achieve your overall academic goals? Upon graduation, did it help you obtain a position in your career path? Are you able to successfully budget and repay your loans?” Anderson asked. “The value of your education appreciates. It’s not like a car which depreciates as soon as you buy it.”

Junior creative writing and philosophy major Paul Carboni said that, to him, the debt is worth it. “The financial aid that I’ve been able to get has put me at a spot that I feel like I’d probably be in a similar boat were I to have gone to a local college, a community college, a smaller university, but for much greater payoff,” Carboni said. “So I feel like, while I may have ended up paying less, I don’t think that it would have been by much, and I think that I’m definitely getting my money’s worth.”

Carboni, who expects to graduate with up to $22,000 in debt, said that, despite the current jobs market, he is not worried about finding employment after college.

“I don’t have any hard numbers, but there doesn’t seem to be a gigantic worry among the campus population of not being able to find work after graduation,” he said. “Part of that may be because we have such a strong specialization in very technical, specialized fields. But even in our fine arts programs, people may be unsure of what they want to do, but there seems to be this pervasive feeling that they will be able to get it.”

Junior mechanical and biomedical engineering major Laura Laham said that she currently plans to work before going to graduate school in order to pay off some of her student loans. Laham originally considered going to community college and switching to a university, so as to mitigate the cost of her education, but eventually decided against it.

“I kind of took money out of the picture when I decided on schools, and Carnegie Mellon seemed right for me, so I ended up here regardless of the cost,” Laham said.

Like Carboni, Laham did not regret her decision to go to a more expensive school. “Except for the cost, I don’t think I would have changed anything about my experience here, and I do believe that there are opportunities have opened up for me here that I wouldn’t have gotten anywhere else.... It’s part of the deal,” she said.

Neither Carboni nor Laham had a clear idea of when their loans would be paid off.

“I know there’s a process I can go through and just kind of do it a little at a time, and it will take a while, but people do it,” Laham said. “I’m bracing myself for it, but I’m not worried about it.”

According to U.S. News & World Report, the executive order will allow students to consolidate their federal loans, thereby easing payment. It will also move up the starting date of a plan passed by Congress that caps student loan payments at 10 percent of income and forgives loans after 20 years. The plan was originally slated to start in 2014, but it will now apply to anyone who took out their first loan after 2007 and who takes out another loan after 2011.

Anderson said that she views student loans as an investment in a student’s future. “Your return on the investment is not only measured in terms of how affordable a loan repayment is,” she said. “It’s measured by so many other factors. It’s your professional growth, it’s your contributions to society, it’s everything. The return on your investment is just much more than your accumulated indebtedness and your ability to repay.”