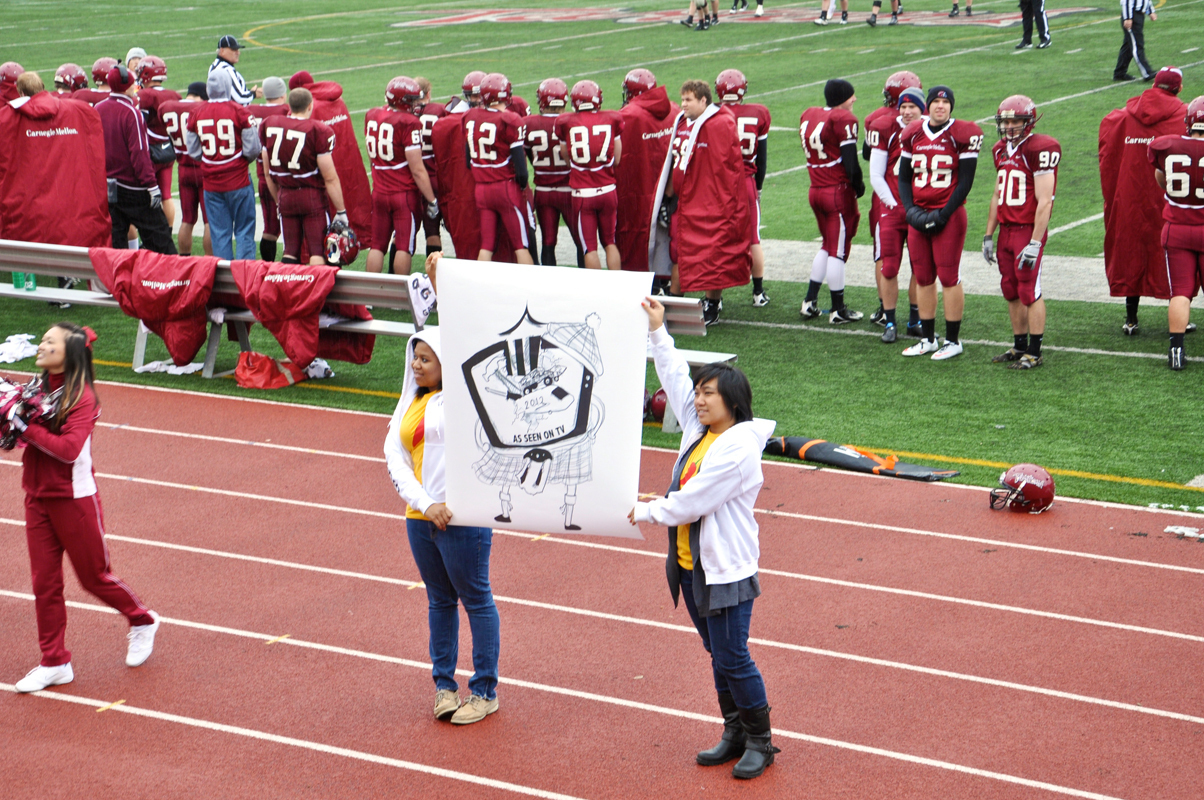 Spring Carnival Committee officially unveiled the 2012 Spring Carnival theme: "As Seen on TV." During half-time of last Saturday's home football game, two members of the committee held up the logo of Carnival. The logo features Carnival traditions, such as booth tools and a buggy. (credit: Courtesy of Spring Carnival Publicity )

In addition to the announcement of the theme, the logo design for this year’s Carnival was revealed to be a television with legs wearing a kilt and a Tam o’ Shanter — a Scottish hat — with various tools and construction equipment seemingly coming out of its screen.

“One of the things we’re working on is finding a location that we can shoot off fireworks from that will make it a good show again,” she said.
On the alumni side, Dan Barnett, the director of on-campus programs in the Office of Alumni Relations, said that his department has begun reaching out to alumni from the years that will hold reunions this year, as well as to alumni special-interest groups that may want to hold events.

Meanwhile, according to Hayes, Spring Carnival Committee has begun lining up the logistical contracts needed for Midway, such as those for tents.

“The fall is definitely about laying the groundwork for Carnival,” Hayes said. She remarked that many people believe that Carnival planning starts in February, but even now the Spring Carnival Committee is busy planning Carnival budgeting, publicity, and entertainment.
One aspect that is taking up a lot of the committee’s time, Hayes said, is the Booth construction standards.

“Last year, [construction] caused a lot of headaches for different organizations because it was a new set of standards,” Hayes explained. “It was a lot stricter than it’s been in past years, and so we are planning on adding a lot of education around those standards so that there aren’t the issues that there were last year, and so that Booth organizations can be more successful.”

According to The Piper, the new Booth construction codes are based on the International Building Code.

Barnett, meanwhile, hopes that Carnival will see more graduate student involvement this year, something he said has been difficult in the past due to scheduling differences in the Heinz College and the Tepper School of Business.

“We’re really excited to continue to amp up our programming,” Barnett said.