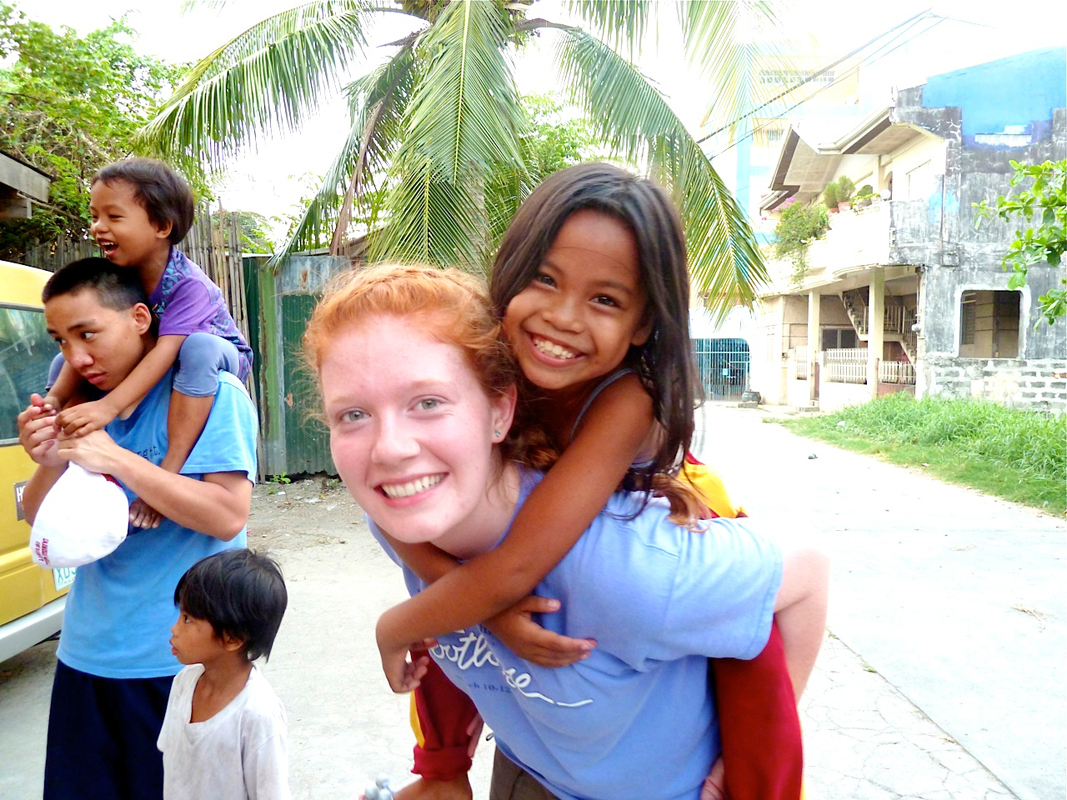 Zakrajsek spent the majority of her stay in the Phillippines playing with local children. Despite a significant language barrier, the children showed their affections for her and called her _Ate_, Tagalog for “sister.” (credit: Sarah Zakrajsek/Personnel Manager)

Luckily I forgot to pack an alarm clock. Instead, I awoke each morning in the guesthouse to the sound of a rooster’s crow. As I climbed out of my bunk bed, I needed to do a quick reality check: You are in San Pedro, Philippines.

The pace of travel had left me disoriented. I had been taking spring semester final exams in Pittsburgh one day, and the next I was on a plane to Southeast Asia with 12 other students and one professor. My team and I had been graciously sent to San Pedro by Carnegie Mellon’s mechanical engineering and civil and environmental engineering departments to serve poor families in the Philippines.

Our local hosts were the men and women of Holiness in Jesus Christian Church (HIJCC). Each day’s itinerary was chosen by Pastor Marcelo Ramirez and professor Robert Reid and was guaranteed to challenge us and engage us with Filipino community and culture.

We devoted the majority of our energy and time toward serving communities living in “squatter” villages. The people we worked with live on low-lying parcels of land that are inundated annually by typhoon flooding. Multi-family homes constructed on plywood stilts become islands when the floodwaters rise — that is, if they don’t first collapse under the forces of fast-moving water currents and storm debris.

Our first task was to design and construct a community toilet. In most communities, the existing sewer infrastructure is simply an uncovered, one-foot-deep ditch running parallel to the streets. Ordinary evening rain showers supply enough runoff to cause the sewer ditches to overflow into the streets where children run and play barefoot. Use of the new public toilet, which resembled a Western outhouse with a concrete holding chamber beneath, would surely promote cleaner streets and a healthier community.

Our second task was to rebuild and repair several homes damaged during the previous typhoon season, using local building materials such as coconut lumber while staying within our budget. Our third task was to design a platform for a new water pump and to drill a potable water well. It was a thrill and a challenge. Water was vital to the impoverished families we served, and the pump needed to be readily accessible even during the flood season.

We spent hours designing and estimating in preparation for construction. When our materials arrived, however, the work was literally taken out of our hands. The local men hoisted the lumber and bags of cement and rushed to get to work. These Filipinos were dignified workers who appreciated our design advice, but our contribution that made the greatest impact was money to pay for building materials. Although many of us came to the Philippines expecting to get dirty by doing the physical labor ourselves, this was no Habitat for Humanity trip. It was much better for the locals to perform the construction for themselves and their families than it would have been if the americanos had done all of the work for them.

While members of my team took turns helping with the construction, I took on an equally exhausting role: keeping the children out of the way of construction. We played for hours upon hours, sometimes dodging bicycles in the streets and sometimes on a field covered with broken glass. I gave the children all of the energy I had, and by the end of each day I was drained physically as well as emotionally.

I yearned to talk to the children about their interests, but our conversations were limited to the few simple phrases that I knew in Tagalog. The language barrier proved to be a major source of frustration until I met Angelo, a 10-year-old deaf boy. Unlike the other children, he didn’t try to speak to me in Tagalog. Angelo and I communicated with each other through a language of gestures, and we became the best of friends.

The Philippines are plagued by poverty, high unemployment, and homelessness. It is estimated that at least 1.5 million children nationwide have been abandoned by their families and live on the streets. This statistic became very real to me when a six-year-old boy walked up to me one night trying to sell me a necklace of sampaguitas, the aromatic national flower of the Philippines. A series of events unfolded which ended with me spending all of the money in my pockets on food for him and a dozen other children who sleep on the streets. I felt helpless and nearly hopeless.

Hope came near the end of our trip when we visited two orphanages supported by HIJCC called Ang Bahay Parola (ABP), meaning “lighthouse.” I had never been to an orphanage before, but I’ve watched the movie Annie several times and expected the orphans we visited to be sad and depressed. On the contrary, the boys and girls of ABP were some of the most blessed and joyful children we met in all of the Philippines. Unlike the street children, the ABP kids were loved and cared for by attentive staff and dreamt of going to college. Hearing each child’s unique story of renewal showed me that, although poverty seems insurmountable, even small acts of love make a large difference.