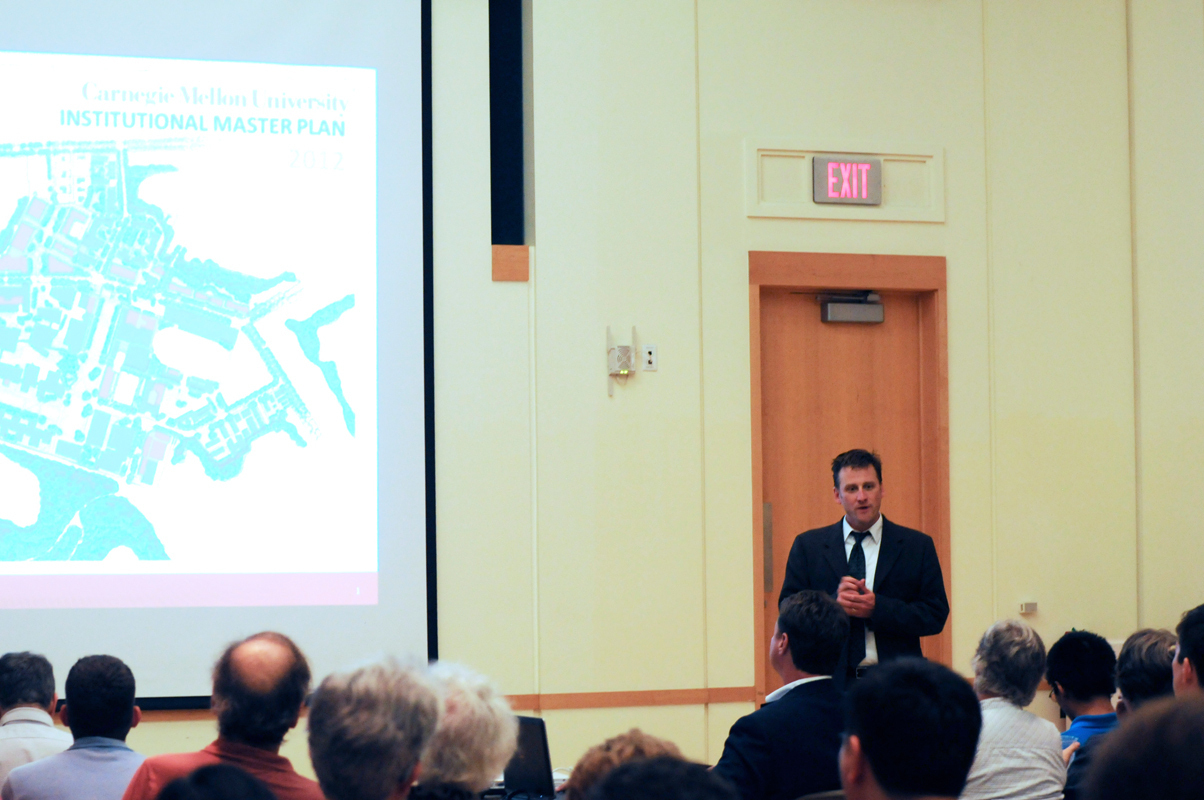 The Carnegie Mellon administration held a town meeting last Monday to update the campus and Pittsburgh communities on the progress of its 10-year master plan.

As required by the Pittsburgh city code, the plan outlines the university’s course for development and expansion for the next decade and beyond. The plan, which was first made public in March, could lead to new academic buildings and significant alterations to Forbes Avenue.

Monday’s presentation was held in Rangos Ballroom in the University Center, and it drew around 100 people from campus and the greater Pittsburgh area. Bob Reppe, director of Campus Design and Facilities Development, stated that continuing the growth of campus and increasing connectivity were some of the main goals.

The plan details several projects that include the development and expansion of the campus along Craig Street and in the Morewood parking lot. The university has identified the Morewood lot as a possible location for a new academic quad, which would include a new Tepper School of Business building.

One project that is in the works right now is a 75,000-square-foot nano-biomedical energy research facility. In his presentation, Reppe called it the “most real” of all the projects proposed.

Students can also expect to see changes to Forbes Avenue in the near future. The plan proposes to reduce vehicular traffic to one lane each way, add bicycle lanes, and reconfigure intersections to make them safer. Some of the concerns that campus leaders have had are the speed of cars traveling down Forbes and the prevalence of jaywalking among students. The hope is that the bicycle paths will provide a buffer between pedestrians and vehicles.

Reppe told The Tartan last year that a main objective is to “embrace Forbes as the main street of campus.” As Carnegie Mellon expands northward, the university aims to break down the aforementioned barriers to student safety.

Ralph Horgan, associate vice provost of Campus Design, said one of the main goals of this master plan is to “increase connectivity among current real estate.” In the future, the university plans to create additional paths to Fifth Avenue, as well as walkways to connect the east and west sides of campus across Panther Hollow.

Travis Rozich, a first-year architecture major, expressed his praise for the plan. “I’m a fan of how we’re expanding.”
“I think it’s been mostly positive,” Horgan said of students’ reaction to the plan.

Many residents who were present, however, were displeased with what they saw as a proposal to reduce traffic lanes in an already congested street. Anne Curtis, a resident on Unger Street, worried that these changes would aggravate traffic problems and ignore the problem of students jaywalking.

Reppe was quick to point out that, at this point, this was just a proposal. The plan will be submitted to city council this week, where it will start the months-long process for approval. A strong characteristic of the plan, Reppe noted, is its flexibility. “We need to be able to adjust so we can accommodate the next big thing that comes over the horizon.”

The plan also includes the addition of a new recreation and fitness area to the University Center, additions to Margaret Morrison Carnegie Hall and Hamburg Hall, and renovations to Skibo Gym.

Currently, only the nano-biomedical facility is being planned and worked on. According to Reppe, the implementation of the other projects would be contingent on funding.