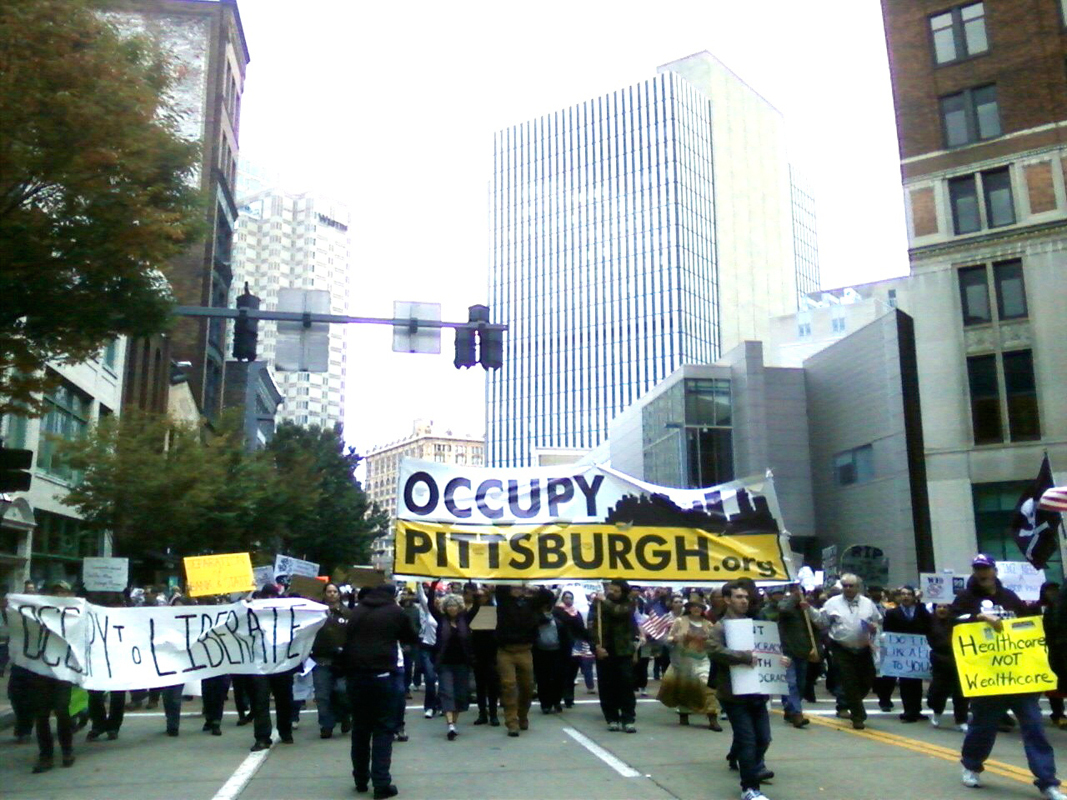 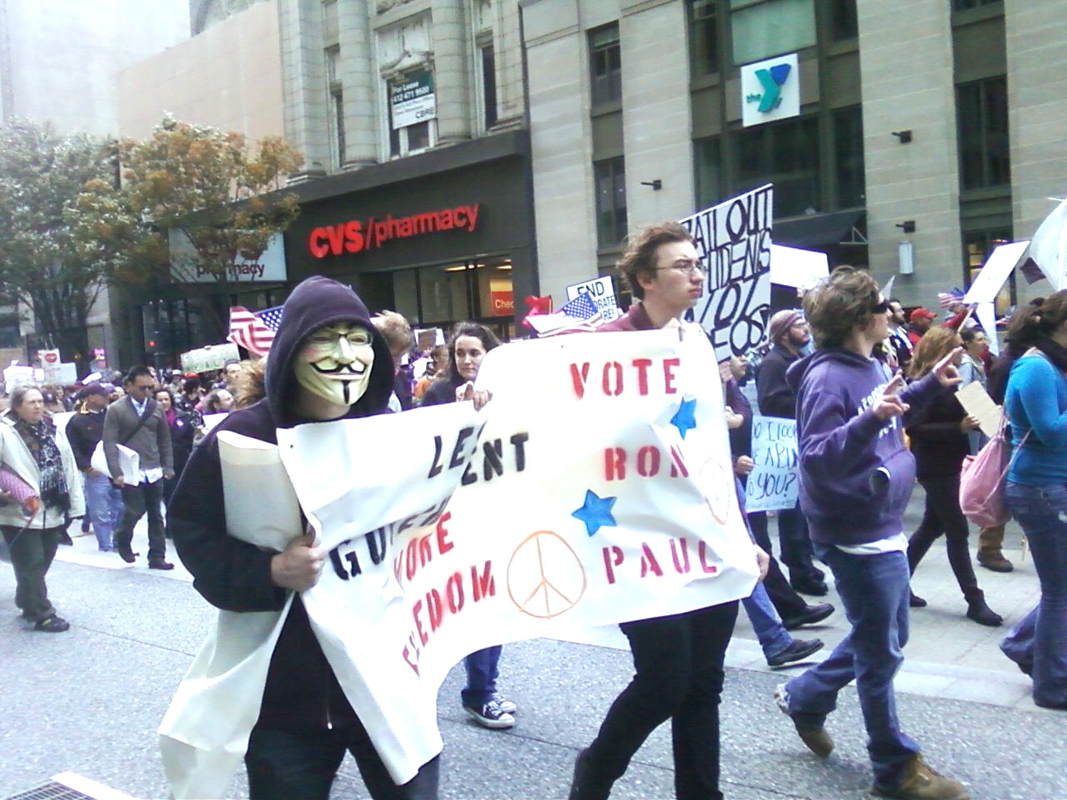 Pittsburgh locals march through the streets of Downtown on Saturday. (credit: Andy Peng/)

Protests swelled within the streets of Pittsburgh last Saturday morning, as thousands gathered together to demonstrate against the increasing role of corporate and financial interests in politics.

The demonstration, Occupy Pittsburgh, brought Pittsburgh into the larger movement that has taken hold in cities across the U.S. after its origin in New York.

Students, workers, children and their parents, and others gathered downtown, chanting and carrying signs, flags, and banners.

The main theme, however, was protest against corporate power. Common signs stated, “Money is not speech and corporations are not people,” “Separation of bank and state,” and “Bail out the students, not the banks.”

“My problem is that the price of everything is going up, and the 1 percent are trying to push wages down,” said Jim Bonner, a laid-off bus driver. Occupy Pittsburgh’s stated goal is “standing together against corporate greed.”

“The politicians and corporations are all in it together,” Bonner added.

Around noon, marchers rallied at Freedom Corner in the Hill District, where a series of speakers took turns addressing the crowd.

Larry Getty, an elderly resident of Pittsburgh, protested cuts to Medicare and Social Security. He held a sign that read: “Who’s going to insure an 80-year-old man with health problems? We need a national health care system. All of Canada and Europe has it. Why don’t we?”

After the short rally, protesters headed toward downtown carrying their banners, signs, and flags. As they passed by the PNC Bank building, the BNY Mellon building, and other corporate headquarters, they expressed their anger, chanting things like “Banks got bailed out, we got sold out” and “One, two, three, four, we declare class war.”

The rally and march coincided with a larger event planned for Saturday, in which groups worldwide were encouraged to participate in similar demonstrations. According to the Occupy Pittsburgh website, “Saturday will see Pittsburgh join the hundreds of cities across the country and hundreds more overseas where the Occupy movement has taken hold.”

In the U.S. and overseas, there are over 1,000 cities where some sort of occupation-style movement has begun.

“I want to live in a world where I know that, if I had misfortune, [if] I was not well off, I would not just be forgotten, like some of these people are being forgotten right now,” said Mark Glosser, a web developer, as he compared the protest to the 1960s civil rights movement, “The civil rights movement today is the underrepresented versus the wealthy.”

The Occupy Pittsburgh movement, which began almost a month ago, captured the attention of the media and local citizens. The group is gaining momentum with over 6,000 members on its Facebook page.

Although the group claims to be “in solidarity” with Occupy Wall Street and have similar goals, participants said they are a separate movement.

“This is a local event with local people,” Glosser told the Pittsburgh Business Times last week. “Organizers from New York are not coming down and doing this. It’s entirely autonomous.”

Steve Iskovitz, who has been involved with Occupy Wall Street, carried around a sign saying “CMU: No autonomous killer drones,” alluding to some of Carnegie Mellon’s government connections.

“I figure I’d just bring a little local angle to Pittsburgh,” he said. As he reflected on the rally, Iskovitz added, “I was going to give up on this country. I thought it was hopeless until this happened.”

Last Thursday afternoon, Pittsburgh city police approved the permit for Occupy Pittsburgh to hold the event and closed off a two-mile stretch of streets on Saturday morning in preparation for the event.

While the protest remained relatively peaceful and orderly, legal observers from the American Civil Liberties Union were on the scene in bright green visors. They kept watch for violations by police and handed out pamphlets informing protesters of their rights.

After the march, protesters ended up at Mellon Green, a park that BNY Mellon owns next to its headquarters on Grant Street. They set up tents and planned to occupy the area for the night. Organizers believe that part of the city code allows for an encampment on private property. However, lawyers and police disputed that.

“This [protest], I believe, is going to result in a critical mass of people who are demanding real change, and I’ve got to be a part of that,” Glosser said.