Benefits of online courses outweighs use of books 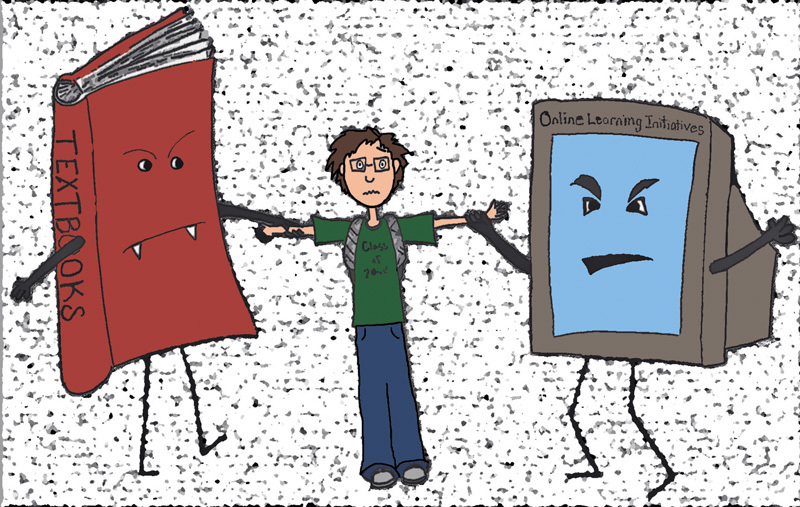 Laptops: They’re small, efficient, and currently adorn the first floor of Hunt Library. Their owners are typing, stooped over, with some biting their nails, even though it’s Friday and the first week back to school. Yet it has become a necessity rather than a luxury to own a laptop while attending college. It is the future, and Carnegie Mellon takes the lead in computer-based discovery as the No. 1 graduate program in computer science as determined by U.S. News and World Report in 2010.

One such discovery stems from Carnegie Mellon’s very own Online Learning Initiative (OLI). The OLI currently offers a slew of free public online courses, from Modern Biology to Logic & Proofs to Chemistry. The site’s headline gives its purpose as, “[…] to enact the kind of dynamic, flexible, and responsive instruction that fosters learning.” And although one may think it is just supplementary materials, that would be wrong. In fact, the OLI builds a foundation for a nationwide goal to improve learning in introductory courses.

Last year, the OLI at Carnegie Mellon was granted $4 million from the Bill & Melinda Gates Foundation, Lumina Foundation for Education, and the Hewlett Foundation to develop educational opportunities.

In an article published by The Chronicle of Higher Education, the state of Washington has vowed to offer online materials as text. It comes as no surprise that the OLI’s free public materials are on the corkboard. Students who have taken Modern Chemistry II will be familiar with the Virtual Lab, a Java-based web environment to simulate experiments that one can perform in a physical lab. In 2010, over 100,000 experiments using the online virtual lab were performed across the globe.

Hannah Wirtshafter, a junior science and humanities scholar, described her experience with the virtual lab. “I would say it was both helpful and overly frustrating. The actual logistics of using the program — drag and drop, right click this, left click this, etc. — were annoying and unnecessary.”

The Virtual Lab was first created in 1999, written by Carnegie Mellon computer science undergraduates, and is currently maintained by professor Dave Yaron’s research group in the Department of Chemistry.

“Despite this student’s frustration, the Virtual Lab has been shown in studies to be very beneficial in student learning and understanding. Our goal is to help motivate students and make chemistry exciting by connecting concepts to real world applications,” said Michael Karabinos, director of the Chemcollective and part of Yaron’s group.

Another initiative of the OLI gained popularity in 2009, when Carnegie Mellon students were given the opportunity to take an accelerated (six-week) statistics course. The bulk of the course was taught through online modules and homework assignments with supplementary instruction. No textbook was required. “The main challenge with the accelerated course was the mental preparation for realizing that it was, in fact, accelerated,” said Diana Ramos, a junior history and psychology major.

With different courses come varying challenges. No individual student learns in exactly the same fashion. However, the future of learning seems to reside in the hands of instructional technologists, groups like Yaron’s that work with the OLI to develop online materials.

Today, a direct link between Washington educators and Yaron’s group exists through letters of support for future grants with statements such as, “Your proposed materials fit in well with the goals of the Open Course Library Project and my introductory chemistry courses at Bellevue College.”

Other universities such as the Massachusetts Institute of Technology (MIT), which is tied for a No. 1 ranking in computer science, have developed over 2,000 free online courses that offer lectures, assignments, and quizzes through the OpenCourseWare (OCW) site at www.ocw.mit.edu.

MIT is quoted alongside Carnegie Mellon in the Chronicle of Higher Education’s article as providing a “smorgasbord” of supplementary material.
However, the two universities differ in that Carnegie Mellon hones in on interactive online modules and programs like the Virtual Lab. The OLI Dashboard also provides students and instructors with real-time feedback about progress and learning goals.

The selling point? In the article, Cable Green of the Washington State Board for Community & Technical Colleges says students pay $1,000 a year for books. At Carnegie Mellon, students taking an introductory chemistry course can expect to pay between $88 and $180 for a textbook, in addition to $20,750 for a semester’s tuition. Furthermore, textbook publishers compete with non-profit developers such as WileyPlus, which offers online supplements for courses like Differential Equations for $82.95. The article suggests students in two-year colleges in Washington will only pay $30 for access to the Open Course Library, which will provide all educational materials.

The future of education may reside in discovery, but the way in which knowledge is conveyed is yet to be determined. Yaron’s group suggests a modern alternative to learning: hybrid courses (like the accelerated statistics course), in which students participate in traditional lectures but reinforce knowledge through interactive computer-based supplements.

The question remains: How long will it take Washington to implement the Open Course Library? The website is up, with instructors working diligently to collaborate with institutions like Carnegie Mellon. Textbook publishers, beware.