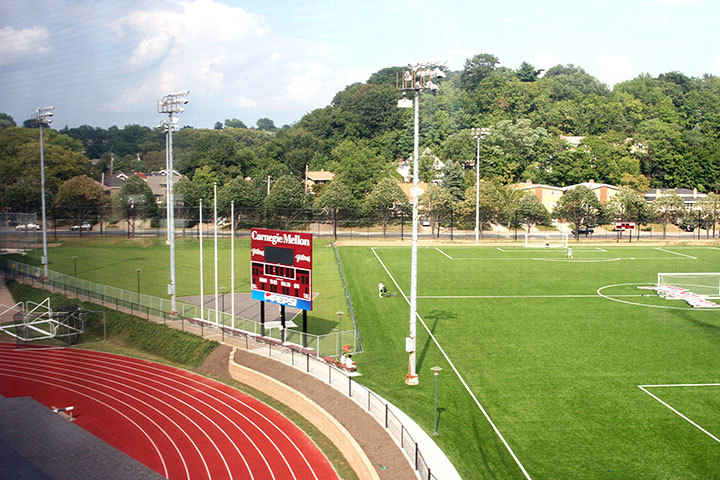 The renovated field will be used to host soccer, track and field, intramural, and recreational sports games. Construction started last May and continued over the summer to finish in time for the fall season. (credit: Celia Ludwinski/Photo Editor)

Last week, the university opened a new soccer field in place of the old intramural (IM) field. Carnegie Mellon had been hoping to build another field, for the purpose of hosting soccer, track, or intramural events, for the past four years. These ideas began to float around as early as 2006, shortly after the installation of new turf at Gesling Stadium. The turf helped tremendously in the logistics of organizing intercollegiate, intramural, and club events, but another field was deemed necessary.

In 2008, the university’s athletic department took another large step toward the construction of a soccer field by forming an advisory board that began to review such an idea. The board consisted of experienced athletic department heads from several universities who were appointed as consultants, as well as Carnegie Mellon alumni and locals.
Some of the ideas included building a facility in Schenley Park and other locations around the area that would serve the university and local high schools. According to Carnegie Mellon athletics director Susan Bassett, a few of the points that the board members strongly considered were mostly focused around the track team and where the team would be able to hold its throwing events.

After the hiring of current men’s soccer coach Arron Lujan, the project gained further momentum. Bassett explained that she and Lujan examined the IM field a few years ago and thought it possible to squeeze a regulation-sized soccer field in the area, as well as make room for the throwers of the track team.

The track team did not get the facilities it had hoped for, but its members’ concerns center on where they will practice given the little space allotted to them. As one track team senior, Morgan Faer, stated, “When we host track meets — and this goes for practices as well — I’m wondering how we are going to fit all the throwing events on that one patch of grass. Maybe you would be able to have shot put going on at the same time as other events, but hammer, discus,and javelin would have to all go at different times.”

Bassett addressed these concerns by explaining that the current plan is for the javelin throwers to throw from the turf into a triangular patch of grass while the hammer, discus, and shot put throwers use their respective circles on the other side to throw into the same area. However, this plan may not allow certain throwing events to be held simultaneously.

“In the past we’ve hosted meets like the Western Pennsylvania Championships, where there are a lot of athletes,” Faer said. “How are we expected to fit in these three events before the meet is over...? Sending an event offsite could cause athletes to miss other events.”

Even with conflicting agendas, major credit for this project must be given to Bassett, as it was not clear last March that this project was going to happen. Lujan and Bassett’s efforts promptly got the project going, and now the field is ready for the fall soccer seasons. Bleachers should be in place later this week on the Margaret Morrison Avenue side of the field. Bassett said, “We’re thrilled with the project and excited with the way it will benefit intercollegiate, club, and intramural sports.”