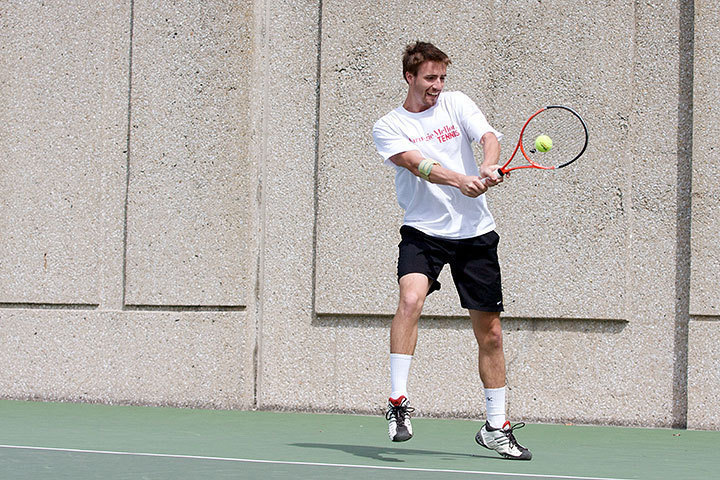 Junior Bobby MacTaggart rips a backhand against an opponent from Hopkins last Sunday. The number-11 Tartans upset the number-nine Blue Jays with a lopsided score of 7–2. (credit: Travis Wolfe/Photo Staff )

The 11th-ranked Carnegie Mellon men’s tennis team upset number-nine Johns Hopkins University last Sunday, 7–2, in a thrilling home match. The Tartans continue to be a threat against top-10 teams, and this win improves their record to 12–4.

The Tartans started the match with excellent serving and volleying, as they swept all three doubles against the Blue Jays. The second doubles tandem of juniors Bobby MacTaggart and Alex Nemerov shut down their opponents 8–5, followed by a solid 8–6 win by the third doubles team of junior Niko Ljuboja and first-year Duke Miller.

With first doubles still on, the Tartans were facing an encouraging 2–0 lead against one of the best teams in the country. Having a home-court advantage on their side, the new doubles duo of James Muliawan and sophomore Jeremy King took out Hopkins’ top team 9–7 to give the Tartans tremendous momentum heading into singles play.

“We made adjustments in doubles and it worked well,” senior Jon Spero said. “If we play like this every match, we have a good shot to compete for a national championship this year.”

To close out the match, the Tartans only needed two more wins to clinch the victory. Spero, playing fifth singles, finished first, dominating his opponent 6–4, 6–0. Nemerov followed suit and dropped only three games against top-ranked David Maldow to win 6–2, 6–1, giving the Tartans the fifth point for a victory. Muliawan and first-year Harsha Rao each pulled out third-set wins to bring the total points to seven.

For the Tartans, this was one of the best upsets of the year. “This win certainly ranks up there as one of the biggest in the program’s history.” Spero added. “We didn’t just win, we won comfortably. Hopkins has beaten us three times in a row, including six weeks ago, so I was proud of the team. Next weekend, we will play some tough teams, so we have to make sure we stay focused.”

“This was a good day for us,” Muliawan said. “My matches were close, but I’m glad Jeremy and I were able to pull it out. Hopkins is a top-10 team, so this just shows we can battle with the best.”

The Tartans have a few days off before gearing up for the Great Lakes Colleges Association Tournament on April 9 and 10. With confidence from this win and stronger doubles teams, the Tartans look to improve.