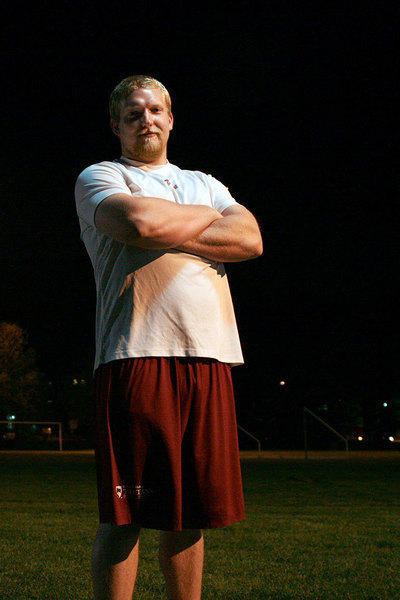 Wrapping up an outstanding career with the track and field team, senior mechanical engineering major and thrower James Hulley was recently named a 2010 National Strength and Conditioning Association (NSCA) Athlete of the Year. With this honor, Hulley became recognized as one of the top collegiate athletes in the country for hard work and success in strength training and conditioning. Hulley was also recently awarded Athlete of the Week honors by the University Athletic Association for his victories in the shot put and discus; he also set a school record in the shot put at the Tartans’ home meet on April 10. For all of the hard work that Hulley has been putting in to his training in the past few years, receiving these awards is very satisfying.

For a typical day of training, whether it is while he is in season or conditioning in the off-season, Hulley lifts in the mornings and participates in throwing practices in the afternoon. While he does not have concrete plans in line for next year, Hulley is definitely looking forward to giving his body a much-needed break from eight years of intense bouts of exercise.

Hulley notes that nutrition and recovery have been crucial in supporting his tough training regime since a rigorous academic schedule has been the main focus of his time at Carnegie Mellon as well.

While he excels in all of the events that has competed in, Hulley cites the shot put as his favorite. This comes as no surprise, as Hulley will be competing in the national championships for the shot put again next month. Having the opportunity to hone his precise technique is something that Hulley looks forward to, giving him an increased chance for victory at the highest level.

For his undergraduate teammates, Hulley has some parting words that should serve as positive motivation for them to maintain a determined and dedicated attitude as a student athlete: “Don’t work too hard if you don’t enjoy it. If I didn’t love training and competing, I wouldn’t be able to train like I do. You’re only an NCAA athlete for four years, but you’re also only going to be an undergraduate for four years. Whether it is athletics or anything else, do what you love.”