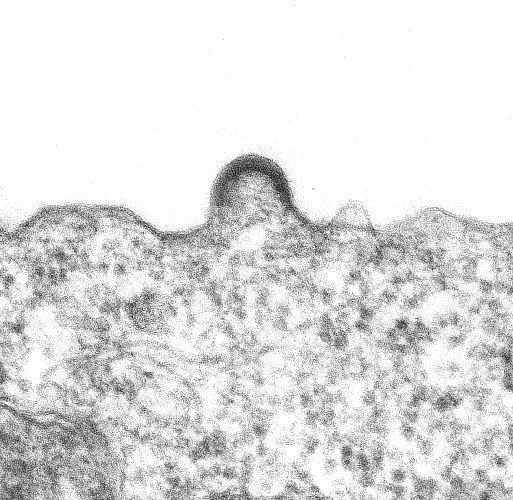 After infecting a cell, HIV particles are ejected to infect another. This is called budding, and it can be seen in the top middle of the picture as a darker bulge. (credit: Courtesy of Wikimedia Commons) 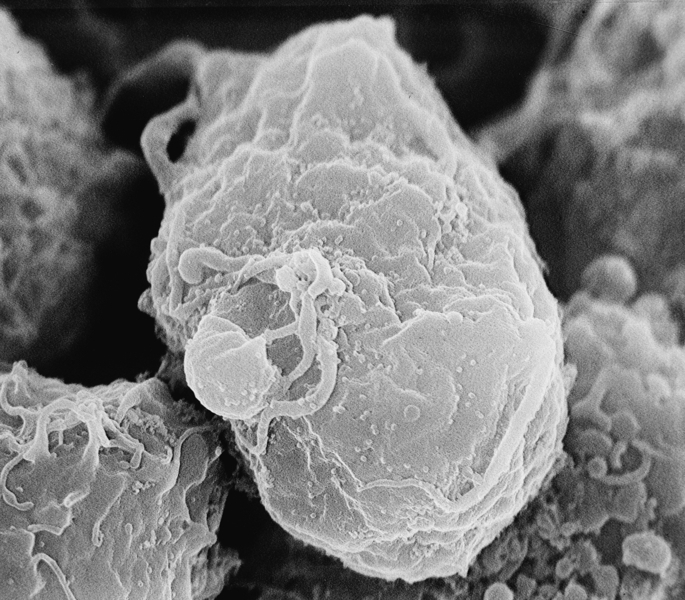 Using electron microscopy, the HIV virus can be seen as miniscule dots on the surface of the cells. Although small, it affects a large portion of the world’s population. Researchers are looking into preventative treatment as an effective method to reduce the chance of people acquiring the disease. (credit: Courtesy of Wikimedia Commons)

Globally, more than 7000 people are infected with HIV every day, totaling to the staggering figure of approximately 2.7 million people per year. Can a pill a day help turn the tide of this pandemic? Scientists and government officials are seriously looking for an answer to this question. The answer is HIV Pre-Exposure Prophylaxis, known as PrEP for short. Prophylaxis treatment is a form of disease prevention that involves taking medicine before exposure to the disease.

This new up-and-comer for HIV/AIDS prevention is not a completely unfamiliar idea. There are other areas of medicine where prevention through chemical prophylaxis has been effective. Taking malaria medications, for example, before one travels to malaria-affected countries is also a form of PrEP. This way, the medicine against the malaria parasites is already in one’s bloodstream to fight off the virus the instant the body comes in contact with the parasites. Wearing sunscreen before exposure to sun to prevent sunburn is also a form of PrEP. Scientists are investigating whether a similar method will work for HIV.

Although antiretroviral medicine, which suppresses the replication of HIV, has only been used as a treatment after HIV infection so far, scientists are exploring if antiretroviral medicine can also be used for prevention. With efforts for an HIV/AIDS vaccine repeatedly failing, PrEP is now in the spotlight as a safe and effective risk-reducing method. Currently, the United States Centers for Disease Control and Prevention (CDC) are conducting clinical trials of HIV PrEP inside and outside of the country. Evidence seems to support encouraging possibilities for PrEP, yet practical concerns for implementation still remain.

While all clinical trials so far are for only the standard everyday PrEP with everyday doses of antiretroviral medication, some researchers are looking into intermittent PrEP, or iPrEP. Prevention through using antiretroviral medicine before exposure is the same as with iPrEP. Yet iPrEP looks into taking antiretroviral drugs only during certain days of the week or before anticipated HIV exposure.

Scientists have high hopes for PrEP because of the implications of previous studies on HIV/AIDS prevention. First, the CDC cites studies where mothers during labor and newborns after birth were given antiretroviral drugs, which show that the risk of infection for the newborns from their mothers was reduced by about 50 percent. Second, when health care workers took antiretroviral drugs promptly after accidental exposures and continuously for several weeks, there was a significant reduction in the risk of infection. Third, it has been shown in monkeys that PrEP with antiretroviral medicine reduces the risk of their infection with a virus like HIV for monkeys.

In addition to previous clinical trials, a mathematical model study gave weight to the optimistic prospects of PrEP. A study led by David Paltiel in the Yale School of Public Health revealed that if PrEP were introduced, it would dramatically cut the lifetime infection rate for men who have sex with men from 44 percent to 25 percent. This mathematical model was based on an already existing dataset of a sample of men who have sex with men from a vaccine trial study, with the mean age of 34. The model was designed to take into account various lifestyles including multiple partners and irregular condom use among the sample.

The results of current trials by the CDC are due in the next few years. The CDC clarified that the public needs to understand that PrEP cannot be the magic shield to replace all other prevention methods. “Because PrEP is unlikely to be 100 percent effective,” the CDC said in its statement, “it will need to be used in combination with other proven HIV prevention approaches.” However, the CDC stated that PrEP would be a valuable additional safety net to those who are at a high risk of HIV infection. Questions regarding wide applications and political hurdles also remain. The high costs of antiretroviral drugs pose the difficult question of who gets the priority when there are limited resources.