Duke Miller shines on and off the tennis court 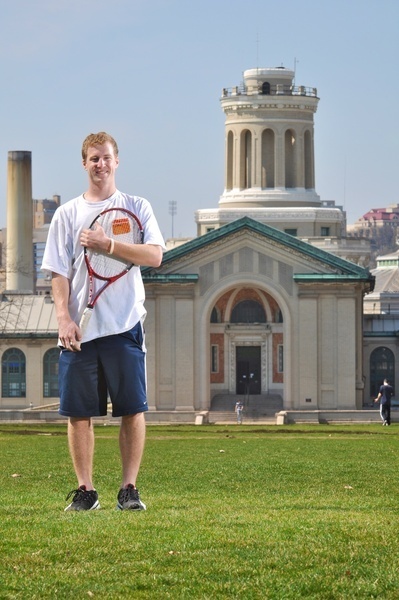 With the snow melted away and spring showing signs of being here for good, Carnegie Mellon’s spring sports season is underway. Notably, the men’s tennis team is currently ranked ninth in the country in Division III. While the team was competing in Claremont, Calif. for their spring break trip, first-year Duke Miller was named the University Athletic Association’s (UAA) Men’s Tennis Athlete of the Week for his several victories in singles and doubles, paired with sophomore teammate Jeremy King.

Miller hails from Poway, Calif., which lies north of San Diego. Although Miller notes the extreme variation of Pittsburgh weather as a cool college experience, he would ideally like to return to sunny Southern California to pursue a career in biomedical engineering after he graduates. Aside from having a busy schedule with school and tennis, Miller has a passion for producing and mixing music from various genres, which he hopes to maintain as a hobby throughout his life.

Adjusting to college life has been a positive experience for Miller, which he credits to being a part of the tennis team. “I’m very happy that I have tennis, as it has provided me with a close group of friends that I could hang out with and relate to, right when school started at a time when I knew less people and wasn’t used to college life,” he said. While Carnegie Mellon has raised his personal expectations to a higher level, Miller is enjoying the balance of athletics and academics so far. Miller originally began playing tennis at age 11, and his family’s background in the sport has urged him to keep playing into college. With a spot within the national top 10 right now, Miller hopes that the Tartans will continue to climb the rankings as the season progresses, and hopes that he can continue to add to the team’s success.