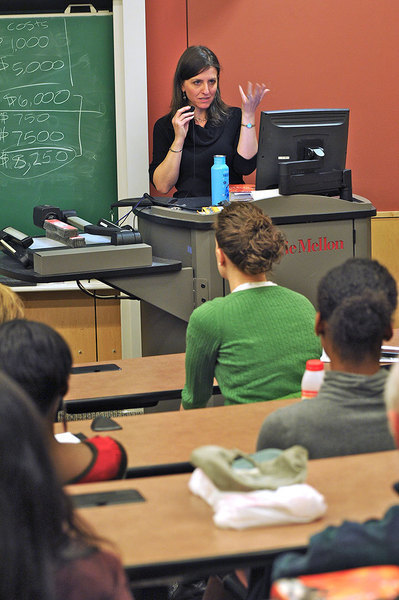 Skloot discussed both the story and the bioethics behind HeLa cells, which are vital to researchers all over the world. (credit: Tommy Hofman/Photo Staff)

“How many of you have used HeLa cells in your research?” The soft-spoken voice of Rebecca Skloot fell upon the audience as professionals and students rustled to get a look at those in the audience who responded to the question.

The Immortal Life of Henrietta Lacks is a biographical, bioethical account of both writer Rebecca Skloot and the family of Henrietta Lacks, or HeLa. Together they search for answers, answers that concern science and humanity alike. Lacks’ story opens a discussion about the rights of patients and their consent for tissue donation to research.

With these issues in mind, Lacks’ children followed the author into the realm of science for questions left unanswered about their mother and her cells.
“I remember when Deborah [Lacks’ daughter] visited Dr. Christoph Lengauer’s laboratory to see her mother’s cells for the first time,” said the author. Chapter 32 reads, “Christoph reached into the freezer behind him, grabbed another vial of HeLa cells, and held it out to Deborah.... ‘She’s cold,’ Deborah said.... She raised the vial and touched it to her lips. ‘You’re famous,’ she whispered. ‘Just nobody knows it.’ ”

HeLa cells were first extracted in 1951 from Lacks when she came in for cancer treatment at Johns Hopkins Hospital in the “color ward” in payment for free medical consultation. The book cover reads, “Doctors took her cells without asking. Those cells never died.” HeLa is the first human immortal and commercialized cell line. As long as HeLa cells are provided with fundamental nutrients and optimal cell conditions, they will continue to divide an unlimited number of times. “They helped with some of the most important advances in medicine: the polio vaccine, chemotherapy, cloning, gene mapping, in vitro fertilization,” reads the prologue of The Immortal Life of Henrietta Lacks.

HeLa travels across mountains, countries, and generations of researchers, even at Carnegie Mellon.

Maggie Braun, assistant department head of the biological sciences department, raised her hand during Skloot’s lecture to discuss the use of HeLa cells.
“I previously worked with [HeLa cells] at the National Institute of Health using them as a control for ‘normal behavior,’ ” said Braun following the event, “we tested them against other cancerous tissues.”

Even the author had conducted research using HeLa cells as an undergraduate biology major. “I was excited every time I looked through the microscope because there she was,” Skloot said.

Skloot began her academic career in biology and in her junior year gravitated towards creative writing. “At the college I attended, creative writing counted as a foreign language so I took that instead of Spanish,” said a chuckling Skloot. The author worked on The Immortal Life of Henrietta Lacks for 10 years, leaving her master’s work to pursue the book. She later returned to the University of Pittsburgh with a copy of the rough draft. There, she received her MFA in creative non-fiction.

The author spoke to a 200-plus audience in East Baltimore the week before coming to Carnegie Mellon. “They were pissed,” said Skloot, “not at me though.” “Black residents near Hopkins have long believed the hospital was built in a poor black neighborhood for the benefit of scientists — to give them easy access to potential research subjects,” reads Chapter 21. “As soon as they know the family is onboard though, there’s not a resistance [to writing about Lacks],” said the author.

“I think it’s always important to remember the ‘life’ in life sciences,” said associate professor Jay Aronson of the ethics, history, and public policy program. “It’s one of those books that opens your eyes to the hidden human dimension of biomedicine, tissues, and common economic stratification. It takes the lens off America and American medicine.”

Students and faculty stood in line for words with the author following the event.

“I was really moved. It’s embarrassing because I never really thought about where tissues for research come from,” said Kelsey Briggs, a materials science and biomedical engineering sophomore. “I’m interested in learning more about ethics because it addresses all sides of human life.”

The Immortal Life of Henrietta Lacks is available at the Carnegie Mellon Bookstore.