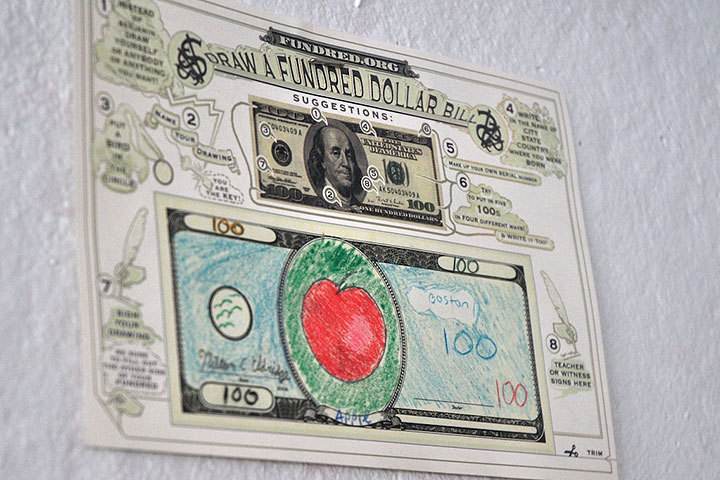 Students were invited to design their own Fundreds, which each represent $100 for lead-contaminated land in New Orleans. (credit: Celia Ludwinski/Photo Editor)

Although still small in scale and just beginning, the Fundred Dollar Bill Project to raise money in New Orleans is attracting a lot of local attention for its unconventional approach to fundraising and its unique blend of charity and art.

The Fundred Dollar Bill Project began in 2006 when artist and sculptor Mel Chin asked the federal government for $300 million to treat lead pollution in New Orleans. “It was devastating to [Chin] when he realized how 30 percent of New Orleans’ youth have been exposed to lead poisoning,” explained Carnegie Mellon CFA alumna Jessica Moss, who heads the regional Fundred collection. However, when the government rejected his proposal and told Chin he would need to raise the $300 million on his own, the artist came up with a new twist on fundraising. “[Chin] knew that he could not raise that much money in any amount of time,” Moss said. “So he said, ‘Why not create that money?’ ” Chin started the Fundred Dollar Bill Project locally in New Orleans’ elementary schools, but the project soon expanded across the nation.

Fundreds are fake $100 bills with the face of Benjamin Franklin, the image of Independence Hall, and other notable features blanked out. The Fundred templates encourage participants to draw what is important to them on their mock bills, such as putting their home on the back where Independence Hall was originally. “The Fundred templates are used almost as equivalents of $100 bills,” Moss said.

“The funny thing about the project is that it’s such a gamble.... The end of the project is June 2010.... Hopefully at that moment, the government will decide whether they will do something with the Fundreds.” There has so far been no word from the United States government concerning its response to the project.

Also noteworthy are the security and transport of these drawings.

“An armored truck will travel to each of the pickup sites around the country and pick up however many Fundreds they’ve collected,” Moss said. “The problem of lead poisoning is so vast and affecting so many people that the symbolic value of the Fundreds is significant, even if the monetary value isn’t yet.”

Those who attended the first drawing event last Thursday were lively and enthusiastic, and by the end of the night, the walls were covered in Fundreds.

“You don’t need to be a good drawer to make these, and I think you also don’t need to be too political to participate and share your views,” said Ryan Sieberg, a graduate student majoring in statistics, as he drew a picture of his house on the back of his Fundred.

“I don’t really think that this is just about making $300 million off the government. When people come together like this and all share their interpretations ... it creates something above a single cause,” said senior social and decision sciences major Sarah Stitzel.

“Art doesn’t need [to] have a set purpose to mean something.”