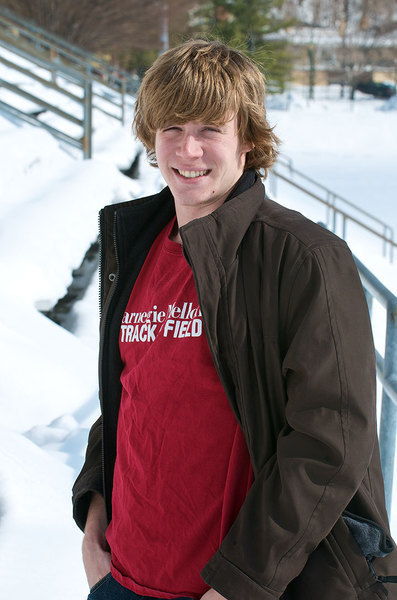 Although he was also involved with baseball, Kurp recognized his strength in running and decided to stick with it as his primary sport and passion. (credit: J.W. Ramp/Contributing Editor)

While it may seem impossible to even think about track and field with the stadium covered in a thick blanket of snow, the men’s and women’s teams have been making moves indoors. Notably, junior middle-distance runner Justin Kurp finished third at his last meet in the 1000-meter run, a great feat in the midst of the indoor season and in preparation for indoor championships and the upcoming outdoor season.

While in high school, Kurp qualified for competition at the state level in both track and cross country, breaking a few school records and maintaining straight A’s throughout his high school career. Although he was also involved with baseball, Kurp recognized his strength in running and decided to stick with it as his primary sport and passion.
Being from Pittsburgh, Kurp notes pierogies, the Steelers, the Penguins, and — jokingly — the city’s street-plowing abilities as some of his favorite aspects of the city. Kurp regards the “Walking to the Sky” statue as being a unique and interesting part of Carnegie Mellon’s campus, and admits that he tends to like it more since some students expressed their dislike toward the structure.

Kurp is majoring in mechanical engineering and intends to go to graduate school after graduating next year. Being an engineer and making a positive impact on society is one of Kurp’s goals for the future. For now, Kurp hopes to have a positive impact during the track season and that his teammates will be on board. “It’s great when everyone’s heart is in the game, and I’d like to see that happen,” he said. With the end of the indoor season approaching, and the anticipation of the outdoor season building up, the Tartans have some time to team up and make Kurp’s notions a reality.