Brandon Yee, another star on an already sucessful swim team 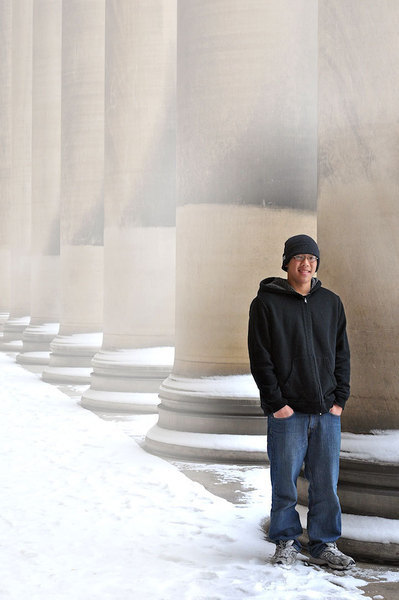 While the snowstorm loomed in the forecast, the men's and women's swimming and diving teams continued to work hard indoors in the pool with the end of their regular season quickly approaching. Recently, first-year Brandon Yee was named the University Athletic Association's (UAA) Men's Swimming Athlete of the Week with a notable performance in the meet against Denison University. Yee placed first in the 500-yard freestyle and second in the 200-yard freestyle in what was a close loss to the Big Red. Although he is only in the first year of his college career, Yee is already making a name for himself in the realm of Tartan athletics.

Hailing from sunny Danville, Calif., Yee cites Pittsburgh's ever-changing weather as something that keeps him on his toes and adds to his college experience away from home. Yee affirms his decision to attend Carnegie Mellon on the basis of prestigious academics and successful athletics programs. Majoring in information systems, Yee hopes to pursue graduate school and a career in information securities in the future.

Yee was named MVP three out of his four years on his high school swim team, and his dedication and talent seem to have carried over to his efforts here at Carnegie Mellon. With sights set on a conference championship and individual feats in the finals, Yee maintains a busy practice schedule with sessions in the mornings and afternoons in the group of distance swimmers. Besides weightlifting and teaming up to study, Yee and his fellow Tartans are forming friendships that extend beyond their time in the pool into social settings on the weekends and meetings during their free time. The Tartan swimmers and divers will head to Emory University in Atlanta, Ga. this upcoming weekend to compete in the UAA Championship meet and hope to continue their strong season into regional and national competitions in the coming weeks.