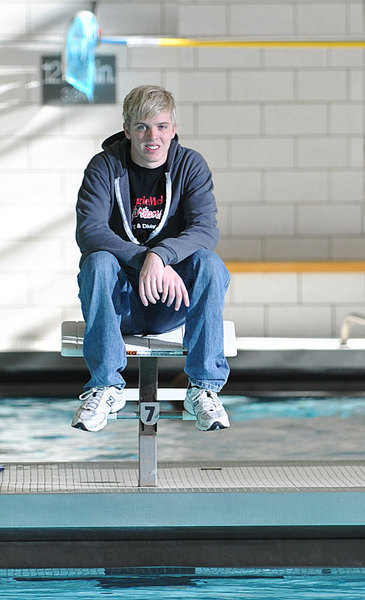 Last semester, junior Alex Hanson was named the University Athletic Association (UAA) Men’s Swimming Athlete of the Week and has been contributing to the team’s success ever since. (credit: J.W. Ramp/Contributing Editor)

With a solid season in the making, the men’s swimming and diving team has had a strong performance from its members so far this year. Currently holding a record of 7–3, the Tartans have one last meet at the University of Pittsburgh next weekend before the conference and national championship competition begins. Last semester, junior Alex Hanson was named the University Athletic Association (UAA) Men’s Swimming Athlete of the Week and has been contributing to the team’s success ever since. Hanson has been a contender at the National Collegiate Athletic Association (NCAA) Championship meet the past two years and hopes to return again this year and perform well enough to place in the top 16.

When he is out of the water and not trying to break 4:00 in the 400-yard IM, Hanson is majoring in mechanical engineering. He notes that while his interest in coming to Carnegie Mellon was mainly for its top-10 academics, a college with a swim team was essential to his decision about where to go for college. Hanson finds a good balance between his full schedule of course work, practices, and swim meets. Hanson shared, “Swimming is a great stress reliever. There’s nothing like a hard practice to help you forget about failing a test. Although swimming takes up a large portion of my day, it has always helped me focus out of the pool.”

Hanson started swimming in a local swim club back home in Minnesota at the age of seven at the suggestion of his swim lesson instructor. Luckily for the Tartans, he decided to stick with it. An interesting side note is that Hanson’s favorite food to eat post-swim meet is ice cream: “...it’s a great source of carbohydrates, protein, and fat — swimmers need their calories.” Hanson looks to keep training hard and improving his times, and seems to be right at home at Carnegie Mellon as both a student and an athlete.