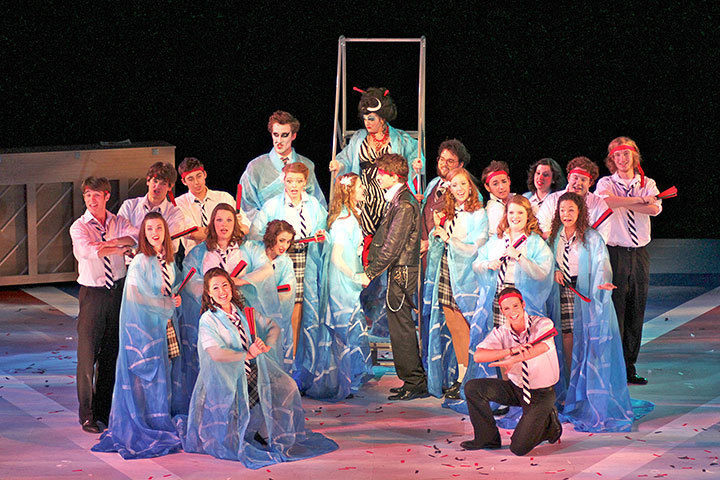 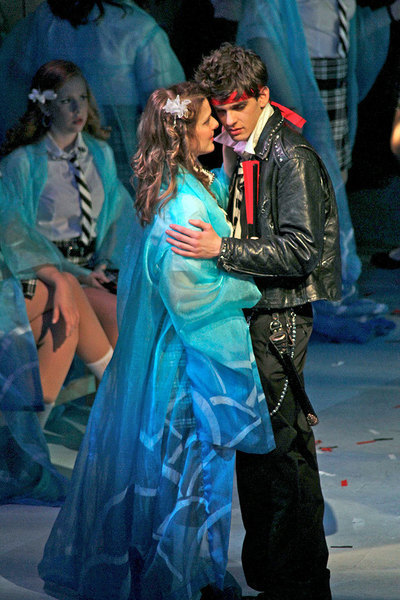 Ancient Japan and modern-day British private school life shared the stage this past weekend in the Carnegie Mellon University School of Music’s rendition of The Mikado. A Gilbert and Sullivan piece, this classic is a comedic love story, originally a parody of the ridiculous rules and customs of Victorian England as shown through the guise of Japan. Directed by Gregory Lehane, designed by new head of the drama department Peter Cooke, and with the orchestra directed by Bob Page, The Mikado has been plucked out of feudal Japan and placed in the more modern-day setting of a British private school. Played by a dual cast, this new adaptation comes with many alterations and twists that allow audiences to relate the story to life in today’s world as well as to its Victorian origins.

As the overture begins, the stage is lit with dozens of paper lanterns hanging above the setting of a gymnasium, where students in uniform gather and mill about, socializing and leaning against lockers, portraying the typical social landscape of middle schools worldwide.

Soon, a lone trombonist enters, amid excited gossiping from the girls and derisive looks from the boys, and reveals himself to be the wandering musician Nanki-Poo, played by Ian McEuen and Ryan Townsend. Nanki-Poo and the schoolgirl Yum-Yum, played by juniors Asha Carroll and Kristen Hahn, are in love.

However, Yum-Yum is the ward and bride-to-be of the official Ko-Ko, played alternately by senior Scott Wasserman and senior Adam Hill, who has risen in worldly status to become the Lord High Executioner of the town Titipu, where the characters live. To assure everyone of the importance of his position, Ko-Ko informs the audience of all the people who “will not be missed” in the extremely entertaining and rather vindictive song “I’ve Got a Little List.” The updated version of this song has the audience in stitches over Ko-Ko’s choice of victims, such as “children who have cell phones and who text with them all day.” Ko-Ko was animated and hilarious, and his scenes with the many personas of Lord Pooh-Bah are equally entertaining.

The haughty lord Pooh-Bah, played by senior Hans Tashjian, who is able to trace his noble lineage back to a single-celled organism, arrives in Titipu and assumes the role of every important official available. Yum-Yum and her two friends tease the lord about his snooty manners in the comically mocking song “So Please You, Sir,” while Ko-Ko frets over his duty of beheading someone as the Lord High Executioner.

Nanki-Poo manages to have a moment alone with Yum-Yum, where he reveals his true identity as the son of the Mikado, the Emperor of Japan, played by senior Tim Ruff. He is forced to flee his position at the court after attracting the unwelcome attention of the noblewoman Katisha, played by seniors Melissa Johnson and Alexa Devlin.

When a flustered Ko-Ko threatens to end their love, Nanki-Poo decides he would rather end his own life than live without his love. However, Nanki-Poo’s imminent suicide inspires Ko-Ko to strike a deal with the young prince: If Nanki-Poo is allowed to marry Yum-Yum and live in happiness for a month, Ko-Ko will then be allowed to fulfill his official duty and cut off his head. Nanki-Poo readily agrees to this, but thanks to the skittishness of Ko-Ko, the interference of Poo-Bah, and the untimely arrival of Katisha and the Mikado himself, things turn out as planned.

Mixing paper lanterns with plaid skirts, and flowing kimonos with a giant portrait of Her Majesty Queen Victoria, The Mikado was a hilarious and engaging work that entertained new audiences and provided a modern twist for those familiar with this classic show, showcasing the talent and ingenuity of the students and their teachers. Her Majesty would be pleased.