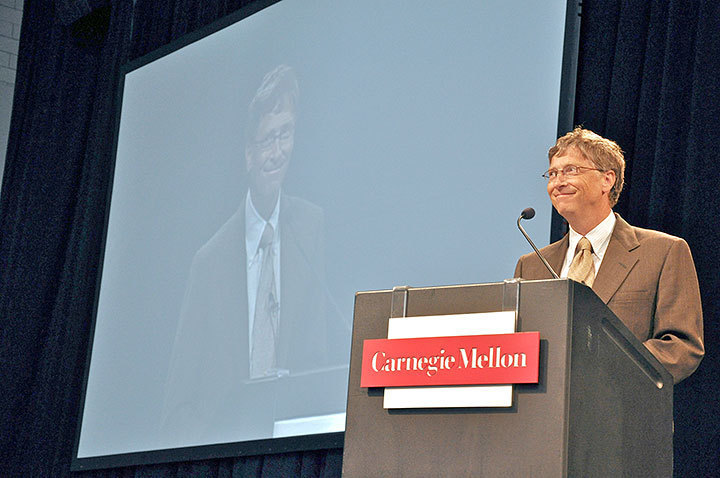 Bill Gates, co-chair and trustee of the Bill and Melinda Gates Foundation and chairman of Microsoft Corp., dedicated the Gates Center for Computer Science to the future of technological progress at Carnegie Mellon.

“It is an honor and privilege to be involved with Carnegie Mellon,” said Gates in a keynote address to students and faculty. A ribbon-cutting ceremony followed the address.

“I’m always inspired when I come here — inspired by the great minds that are here and the ones that will be coming here,” said Gates. “I’ll be following your work, and I can’t wait to see these great advances [that] are delivered and the progress that will enable.”

The Gates Center adjoins the Hillman Center for Future-Generation Technologies, another research building where principles of computer science and robotics will be applied at a larger scale. Together, these two buildings house the School of Computer Science (SCS), which contains classrooms, offices, research space, and a 360-foot long helix.

Designed by the renowned Mark Scogin Merrill Elam Architects of Atlanta, Ga., the centers sit at the crossroads of the campus, connecting it literally from one end to the other. The new complex has five main entrances, as well as two pedestrian bridges branching out to major parts of the campus, including Newell-Simon Hall.

The Randy Pausch Memorial Footbridge, a separate bridge that will be dedicated to late computer science professor Randy Pausch as a tribute to his vision for marrying areas of computer science with those of the arts, extends from the Gates Center to the edge of the Purnell Center for the Arts, the facility that houses the university’s School of Drama.

“It is great to see the ambition taking place in this particular project that the Foundation is helping to fund,” Gates said of the new research center dedicated by his foundation.

Gates previously visited Carnegie Mellon last February. He was once again welcomed to the campus last Tuesday afternoon by a throng of students and faculty members in Wiegand Gymnasium, University Center, where he shared his thoughts on the university’s technological initiatives, as well as technological outreach worldwide.

“Pioneering work in computer science has been going on [at Carnegie Mellon] for over half a century,” said Gates.

Gates acknowledged the far-reaching accomplishments of the SCS in computer science, robotics, human-computer interaction, and artificial intelligence. He also recognized the school’s Open Learning Initiative: a project that uses online interactive material to adapt to students’ learning needs. It enables professors to gauge classroom performance and spot where gaps in knowledge need to be filled in.

The potential for using computing in areas like computational biology will not only continue, but accelerate, he said.

“Robotics is a great example — whether it’s learning, vision, speech-recognition, or mechanical modeling — all of these things get pushed to the state-of-the art here; [Carnegie Mellon] has been a leader in that,” said Gates.

Students and faculty of the School of Computer Science moved into the new buildings in August.

“The Gates Center provides an absolutely wonderful environment for computer science projects,” said Hatem Alismail, a master’s student at the Robotics Institute in the SCS.

Computer science Ph.D. student and another occupant of the Gates complex, Stephanie Rosenthal, stated in an e-mail, “The complex is an amazing space — the windows make it feel so much brighter in the building. I’m always discovering a new alcove or meeting space. The common areas and offices are comfortable places to work and collaborate with my peers.”

Bernardine Dias, an assistant research professor in the Robotics Institute, said, “The new complex is an inviting space for people crossing the borders of all disciplines and reaching out to each other; it is very accessible.”

“This university earned its reputation by marching in the direction of new concepts with a vision and courage to go where others would not tread,” said Randal E. Bryant, dean of the School of Computer Science. “And this has been a catalyst for us to grow in our partnership with our contributors,” he said.

“The generosity of the Gates and Hillman Foundations and our many other donors will have a lasting impact on our university,” said Cohon. “These buildings have already transformed our campus, making it more cohesive, more functional, and more beautiful. They have been designed from the ground up to meet the needs of our computer science students and faculty, whose work continues to transform science, society, and the arts.”

Carnegie Mellon’s long-standing tradition of collaborative work appeared to be in sync with Gates’ vision for the future of learning on a global scale.

“We need to revolutionize education,” said Gates. “The experience that [students] have at Carnegie Mellon is unfortunately an exception, not the rule,” he said.

Gates also said that having a sound and up-to-date education is one of the most critical steps toward personal and professional development, as well as global socioeconomic progress. On his philanthropic efforts, Gates said that it “is fun giving money away and seeing it being used wisely.”

“This is an historic day not just for the School of Computer Science, but for all of Carnegie Mellon University ... and for all of Pittsburgh,” said Cohon. “It signifies the absolutely crucial role that this [university] plays ... in the world,” he said.