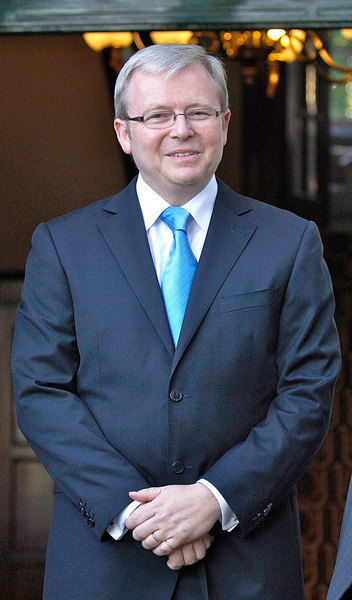 As G20 fervor spreads to campus, the Carnegie Mellon community will have the opportunity to hear Australian Prime Minister Kevin Rudd give a special keynote address, followed by a panel discussion of policy experts. The prime minister’s address is scheduled to take place on Thursday in Rangos Hall in the University Center at 5 p.m. Doors open at 4 p.m. to allow guests to be seated.

Rudd is the 26th prime minister of the Commonwealth of Australia and the occupant of the country’s most powerful office. He also heads the center-left Australian Labor Party on a federal level. After joining the Department of Foreign Affairs in 1981, Rudd pursued his career in foreign service at posts in the Australian embassies in Stockholm, Sweden and in Beijing, China. Throughout his political career, Rudd has been on the forefront of educational reforms, particularly those advocating the importance of teaching foreign languages in Australian schools.

Rudd is a strong proponent of policies related to climate change and aims for Australia to demonstrate international leadership in this field, according to the climate change plan he describes in a video clip on his personal website. As stated in The Australian, the prime minister has also established a commission for nuclear non-proliferation. He looks toward the G20 as a major international summit for “multilateral engagement,” as stated in the article.

Before flying into Pittsburgh for the G20 conference, Rudd will attend the UN General Assembly meeting in New York.

The address is expected to strengthen Carnegie Mellon’s reputation as an international university, as the Carnegie Mellon satellite campus in Adelaide, Australia houses programs in the university’s Heinz College. An effort that began almost four years ago, the Australian campus serves as the university’s Asia Pacific education base. It currently offers two master’s degrees — the master of science in public policy and management and the master of science in information technology.

As with the speeches of President Barack Obama and former Indian president A.P.J. Abdul Kalam given at Carnegie Mellon in the past, Rudd’s speech is aimed at enriching the campus community’s experience of hearing a head of state talk about international affairs and policies.

The event is sponsored by Carnegie Mellon University, the Allegheny Conference on Community Development, the Pittsburgh Technology Council, and the World Affairs Council of Pittsburgh, along with the H. John Heinz III College, Carnegie Institute of Technology, Carnegie Mellon Economics Society, and the International Relations and Politics Program.