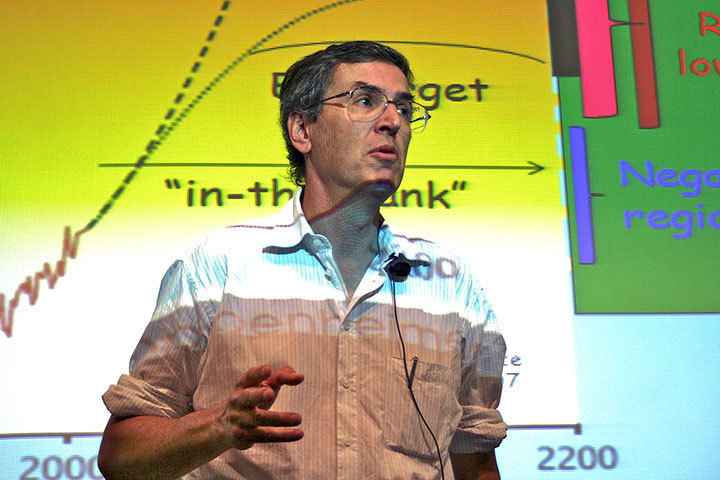 Last week, Douglas Boucher of the Union of Concerned Scientists lectured at the University lecture series. Boucher, pictured above,introduced ways in which we can help protect the environment and how the G20 can serve that purpose.

On Sept. 10, Carnegie Mellon’s University Lecture Series guest speaker Douglas Boucher gave a talk on the importance of climate change education and the problems with deforestation.

Boucher, an active member of the Union of Concerned Scientists and previously a professor at the University of Quebec and McGill University, said he treads a fine line between academics and politics.

“Currently, I’m a recovering academic. It’s nice to be back in an academic setting, especially since there is a lot going on right now involving climate change around the world,” Boucher said. “And fortunately, it’s all coming to town.” What Boucher referenced is the G20 Summit that is drawing nearer. “The Obama administration specifically chose Pittsburgh for this meeting as an example of what can be done in terms of a transition from an old energy economy to a new energy economy,” Boucher said.

He highlighted that one of the only ways to have changes made in politics is through public pressure. Boucher advised students to get involved, in one way or another, in the G20 Summit.

In his lecture, Boucher talked about the possibilities that could happen if conversations like the G20 went well. Boucher brought out a map of the world, skewed to show each country’s size proportional to its carbon emission. Then, in a diagram of countries who are supportive of environmental action and those who have power, Boucher showed that many of the G20 members are holding back in terms of environmental activism. “Some countries like Japan are way up there in support,” Boucher said. “Then there are the possible deal breakers. These countries, like Saudi Arabia and Russia, don’t want there to be an agreement on climate change for obvious reasons.”

He also noted that some less powerful groups, such as the Association of Small Nation States, literally see climate change as a threat to their existence because a small increase in water levels could wipe out entire groups and islands. He also noted the impact climate change could have on Pittsburgh locals.
“If we go by the business-as-usual scenario, we are going to shift the climate in western Pennsylvania so that, by the end of the century, it resembles the climate we have in Alabama,” Boucher said.

He stated possible scenarios of how our world’s future could look, depending on our actions. If we curb our emissions by over 80 to 90 percent, Boucher claimed that we could live in a world with relatively low environmental damage. Boucher’s message to students, and the focus of his research, is to prove that this fantastic feat can be done, and it can be accomplished in a way that is not only economically feasible, but also economically beneficial to us.
Boucher explained this using an analogy of his newly purchased hybrid car. Even though his car was an expensive investment, he ended up saving money after a few years due to the amount he would have otherwise spent on gas. An environmental group that Boucher is part of, the Union of Concerned Scientists, showed a study to explain how it is practical and realistic to cut our energy consumption by 2 percent over the next decade, and do it efficiently.
Boucher is sure of the possibilities for improvement because he believes it is American politics to try every other solution before policymakers arrive at the right answer.

Boucher said that Carnegie Mellon is a hotspot for green technologies and it is crucial that, as a school, students take initiative to constantly improve these technologies and make climate change goals more feasible.

He concluded by noting how the changes made now will affect our future. “Our grandchildren are going to live in a planet and atmosphere based upon our decision and the ones made in Pittsburgh in the next few weeks,” he said.

Indira Nair, the Vice Provost of Education, saw this lecture as a crucial part to educating Carnegie Mellon students about climate change.
“We only see the storm [of climate change catastrophes] in temperature changes. We don’t have the eyes to see the storm, and this lecture really helps us have the eyes to see it,” Nair said. “It was a truly exemplary talk for an educated public.”