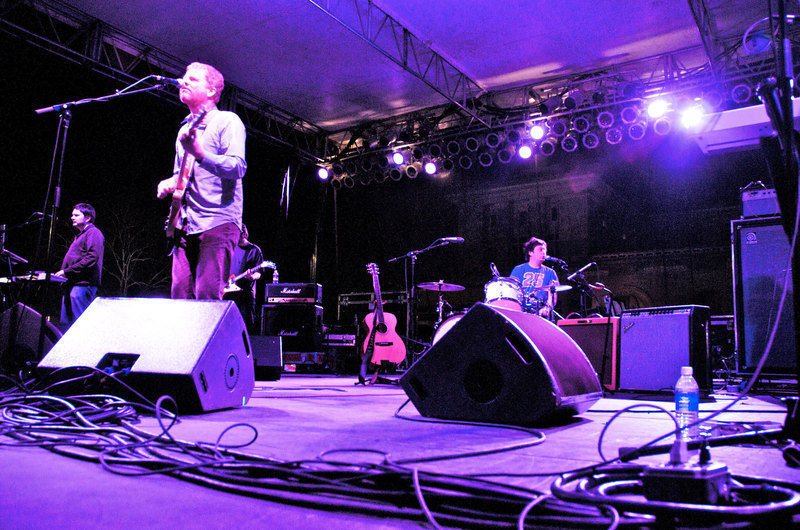 You’d think it would be impossible to make it big with a band name like that. And yet The New Pornographers, an exuberant Canadian rock band, have done just that.

Their mix of pop songwriting and punkish energy has won over critics in mainstream and alternative music circles alike. They have reached commercial success too, touring everywhere from the nearby states within the U.S. to faraway Australia. On Friday night, the group gave its first performance of 2009 at Carnegie Mellon.

The CFA lawn was packed with students and energy as the group took the stage. They’re a band that, at first glance, is unassuming; they dress in not-that-skinny jeans and modest-toned collared shirts. Lead singer, guitarist, and principal songwriter Carl Newman speaks — and sings — with a thick lisp. Kurt Dahle, the group’s ferocious drummer, glugs beer and smokes as he plays. You’d think this is a pretty ragtag bunch, but there’s plenty of polish underneath the shaggy first impression.

Newman tightly structures his music around vocal melodies, using drums and guitars as rhythmic ammunition to support his songwriting. On “My Rights Versus Yours,” the opening number of the show, Newman exercised a fierce howl, where he imagined a “new empire in rags.”

This is the first single off of Challengers, the group’s 2007 release. Though the tune’s energy and imagery are provocative, the album as a whole lacked the precision in songwriting and originality that the group had been lauded for in the past. In fact, it was 2005’s Twin Cinema where Newman flexed his mastery in composition and the ability to build a group dynamic around his music.

It’s no surprise, therefore, that most of the concert on Friday night was devoted to music from this release — much to the pleasure of the crowd. “Use It,” one of the first tunes of the evening, is a lightning bolt of energy. The hook goes like this: “If you’ve got something that sheds some light, use it tonight.”

It’s a mantra that Newman sticks to himself. His musical strength lies in the ability to stretch and challenge the expected duration of the “pop” song, which is now decades — if not centuries — old.

Though most of his tunes only have a couple of minutes’ worth of strong melodic material, Newman uses his powerhouse group of musicians to yank out all of the potential energy and life that each tune holds. “Stacked Crooked,” from Twin Cinema, opened with easy guitar strums and cymbal splashes that tread into a subdued vocal phrase. There’s a continuous momentum build that takes over four minutes to reach fruition. There’s a couple of verses and choruses — standard form for a pop tune — that get louder, faster, and heavier with each pass. By the last pass of the chorus, there’s a drumbeat so fast and raucous, you’d think the group had started a different tune altogether.

Patience and pacing, therefore, are important concepts in the group’s music, and there were plenty of both at Friday night’s performance. “The Bleeding Heart Show,” much like “Stacked Crooked,” began with a rubato — an adjustment in tempo — figure from guitarist Todd Fancey and Newman himself.

There was over a minute of singing and guitar playing before any other instruments came in. Even after the drums, bass, and keyboards entered, the angular melody of the verse still persisted. It was not until the two-minute mark that the “ooh ooh” refrain entered. Then, the tune exploded into the line, “We have arrived!” By the end, the song was almost five minutes in length — a long way from the two-minute anthems of Chuck Berry and the Beatles.

The group delivers such a strong balance of arranging and composition that the democratic process of constructing a song is integral. Newman writes most of the melodies and gives the band free rein to design parts around them.

“A lot of times [Newman] and I will play, just the two of us” to get the parts right, said Dahle backstage after the show. “Sometimes he’ll say, ‘Yeah, do that beat you just tried,’ but a lot of times I just make the parts myself.”

Though Twin Cinema was the focal point of the evening, the New Pornographers made sure its older fans didn’t go home disappointed. The group plummeted into “Electric Version,” a recklessly joyful tune from their 2003 album of the same name. Polish may be a defining concept in the more commercially successful portion of the group’s output, but here it’s unnecessary; the unpredictability of the drum pounding and guitar thwacks keep you listening.

It’s this attitude of rough-around-the-edges that made the opening band, Ted Leo & The Pharmacists, so entertaining. Leo — who, like his bandmates, hails from New Jersey — doesn’t have the soaring vocal capabilities of Newman, nor do his songs flex the same meticulousness, but what the Pharmacists lacks in mainstream configuration they make up for in energy, stage presence, and an old-fashioned sense of punk rock testosterone.

Still, the spotlight was on the New Pornographers. In their last few tunes, they made sure to deal out their strongest cards. “Sing Me Spanish Techno” is a cheery, relatable tune that confesses to “listening too long to one song.” The final song of the set is an old tune entitled “My Slow Descent Into Alcoholism,” an appropriate tune about college life.

The audience was elated to have one of the finest bands at Carnegie Mellon to celebrate, and when Newman approached the microphone and asked, “Is school almost over?” everyone gave a billowing cheer.

There are still a couple of weeks of classes left, and the always-crippling finals period lurks in the shadows, but the vigilance of the crowd and the spirit of the moment makes it feel like the end is just days away.