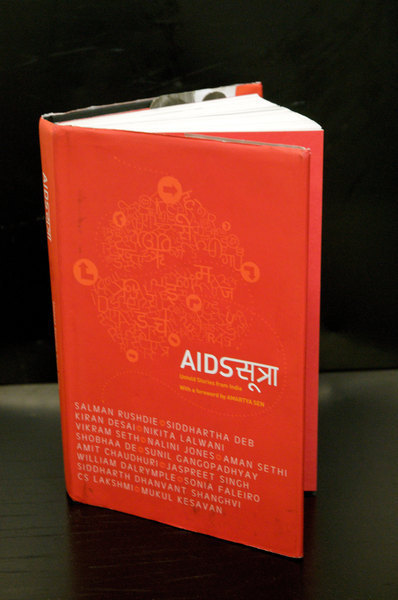 Few compilations of short stories pack a punch like AIDS Sutra does. Sutra — the Sanskrit word for “doctrine” or “narrative” — has been most popularly recognized as a part of the phrase Kama Sutra, an ancient Indian doctrine on sex, and while the usage of sutra in the title of this book is not intended to bring up this linkage, the association is fitting considering the discussions of sexual matters that the book elaborates on.

Funded by the Bill and Melinda Gates Foundation, AIDS Sutra consists of real, raw, moving stories written by some of India’s finest writers, both those living in India and those of Indian descent living elsewhere in the world. Such authors as Man Booker prize-winning Salman Rushdie and Kiran Desai have contributed to this collection. The book also has an interesting foreword written by Amartya Sen, an Indian economist who won the Nobel Prize for Economics in 1998, that provides an insight into the economic impact that AIDS can have on a country, a perspective that is hardly ever written about.

The book approaches all the repercussions AIDS can cause: issues of ethics and secrecy for the patient, spouses unknowingly contracting the disease from their infected partners, orphaned and HIV-positive children, the consequences for the gay population, and many more. The stories are set in Indian society, one that is bound by a multitude of social constraints and stigmata attached to the idea of AIDS. All the writers describe personal experiences that they have gone through in coming in contact with the disease and being inspired to write something moving about it.

Desai’s story, “Night Claims the Godavari,” explores the world of sex workers in India and describes intimate details of their lives. She succeeds in invoking pity in the reader, even making the sex worker’s profession seem justified. These women have difficult lives that are bound by poverty and desperation, and the risk of contracting AIDS makes their situation even harder.

Siddharth Dhanvant Shanghvi relates the story of a gay actor and how he tries to run away from the disease when it begins to take over his life. His words describe many HIV-positive people’s situation: a life plagued by constant fear — fear of being discovered, fear of the disease, fear of death. In the midst of all this fear, people tend to lose themselves and their identities.

Rushdie’s story, “The Half-woman God,” is one of the most moving stories of all. He describes how AIDS affects the hijra population in India. Hijras are castrated men that, due to their situation, are ostracized from the community and are forced to spend their lives as prostitutes and beggars. Due to prostitution, they are constantly at risk of contracting AIDS. Rushdie gives readers a view into the lives of these hijras and thus strings together the connection between AIDS and yet another community in the Indian society.

Prostitutes, the gay population, and hijras all encapsulate different facets of the impact that AIDS has. But perhaps the most pitiable impact is that on the children of AIDS patients. Most of these children are also HIV positive, having inherited the disease since birth, and will live short and brutal lives. Many of them are orphaned as well, making life all the more hard. In his story, “*Bhoot ki Kahaanian*” — meaning “ghost stories” — Jaspreet Singh retells his experience spending time with HIV-positive children in an orphanage, describing many heart-rending stories about the lives some of these children lead.

All 16 stories contained in the book are unique. They evoke a wide range of emotions in the reader — sorrow, pity, shock, and anger. It is appalling that the number of HIV-positive people in India is growing so rapidly, but the Indian government refuses to acknowledge it. It is pitiable that AIDS patients are not granted the same rights and given the same status in Indian society as other individuals.