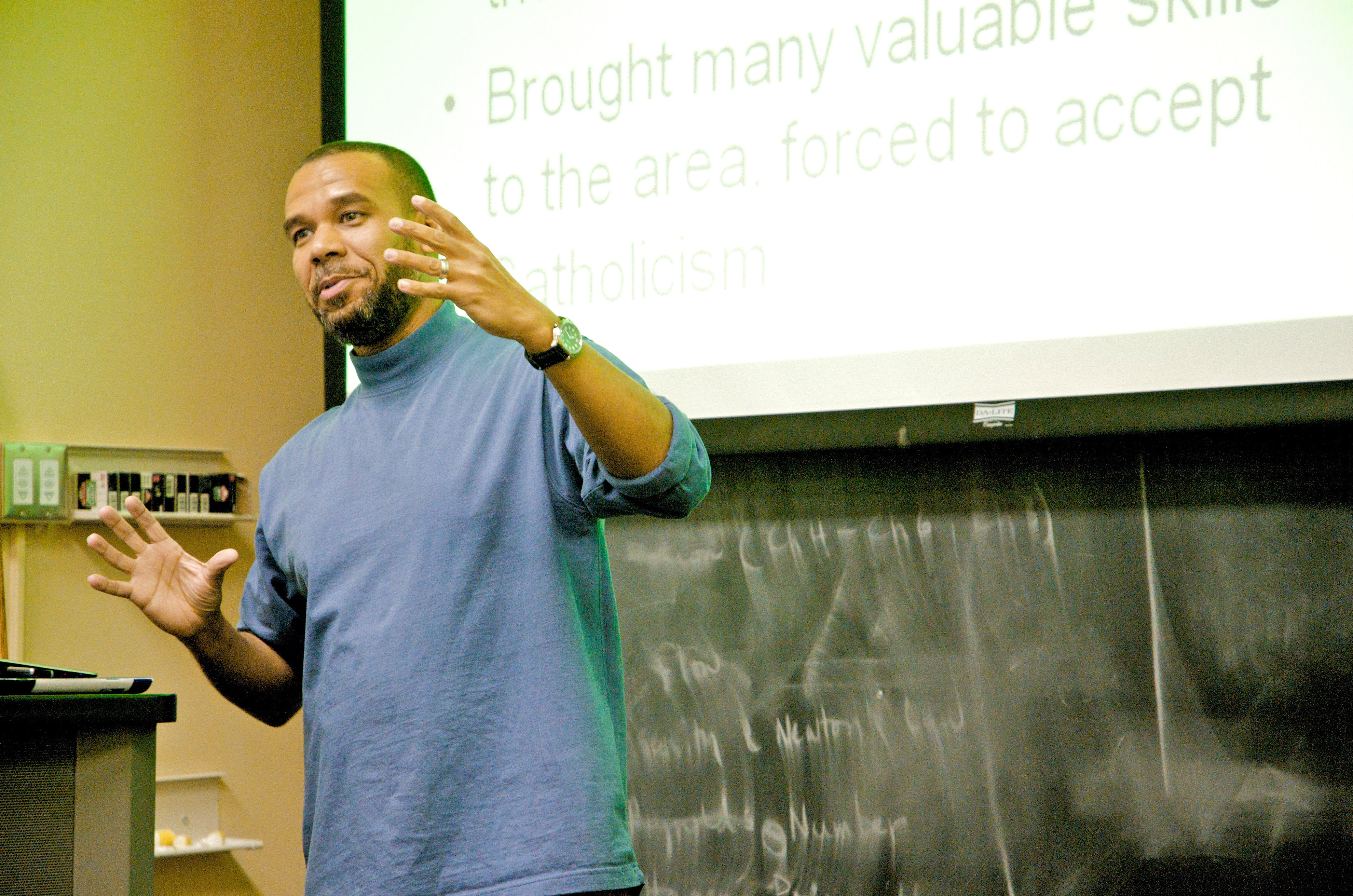 Arif Jamal of the University of Pittsburgh discussed the spread of Islam in Western Africa last week at an event to commemorate Black History Month. (credit: Kristin Severson/Photo Editor)

The lecture was a collaborative effort between the Muslim Students Association (MSA) and the black awareness organization, SPIRIT. While an acknowledged presence of Muslim communities across the U.S. exists, “not many people are aware of the diversities among Muslims,” Jamal said. He also said that a large segment of the Muslim population in the U.S. is actually from the U.S.; that is, they are American Muslims.

According to a Newsweek report, there were an estimated 7 to 8 billion American Muslims in the U.S. in 2008, excluding residents who do not have U.S. citizenship. Since the U.S. Census Bureau does not classify citizens according to their religions, it is less likely to obtain an exact demographic.

“African-Americans make up a large percentage of the people who convert to Islam,” Jamal said. But for the Muslim African-American, being Muslim goes in hand in hand with “not leaving being black,” he added.

“I always had an affinity for Islam,” said sixth-year chemical and biomedical engineering major LaToya Williams. “I found it so beautiful, but I was never able to investigate the tenets the way I wanted to. Through this lecture I realized that the sense of communion in Islam is so similar to that in African culture,” she said.

During the first half of his presentation, Jamal walked his audience through the corridors of African-American history, focusing on the spread of Islam in Western Africa well over 1000 years ago. “Islam is not a new religion, even in Africa,” Jamal said. Contrary to the popular belief that Islam was brought to the Africans by Arabs, it is a part of a very “early metaphysical declaration” in the African continent, Jamal said.

“Islam became intertwined with African culture, and was incorporated into the African society.... Archeologists have dug up Muslim sites in Western Africa,” he said, displaying photographs of African-style mosques and pyramids, some shaped like large beehives.

The lineage of present-day African-Americans can be traced back to diverse entities in Western Africa that were funneled to the New World via the passage of slavery. “As an African-American, it made me curious about my own genealogy and heritage,” Williams said.

Jamal transitioned into the second part of his lecture, during which he emphasized the importance of the Muslim identity to African-Americans, and argued that the present-day notion of brotherhoods and sisterhoods were born out of the slaves’ experience of the “Middle Passage” — the slave trade route that brought Africans to the New World. “These are Muslims trying to preserve their identity by practicing their religion,” Jamal said of modern-day brotherhoods.

Punctuated with evidential primary documents, the second half of Jamal’s presentation illustrated the Muslim origins of numerous African slaves who were imported during the slave trade, which lasted almost three centuries.

Common Muslim names like “Mohammed” and “Mustafa” in their Arabic forms, as well as their African variants, were printed on the slave import documents. The documentation consisted of legal texts and autobiographies, including details about mosques, Islamic attire, and dietary restrictions like “refusal to eat pork.” Physical problems of Africans, such as broken limbs and missing body parts, were also indicated in the documents.

“The use of primary documents was very assuring,” said Khalid Harun, a Carnegie Mellon alumnus and MSA member.

He also demonstrated how Africans were classified by their slave-owners. “Africans were used because they had particular skills that were needed in the slave-based economy,” Jamal said, and that the demand for Muslim slaves was an increasingly conscious one due to their “devotion, literacy, and organizing capabilities.” He then produced an early slave document titled “Cotton and Rice Negroes.”

According to Jamal, the significance of education and language is usually underplayed when referring to African Muslims. He also pointed out that the first slave narrative was written in Arabic, revealing both the literary and cultural roots of the African slave. “The rich Muslim tradition of learning, embodied in Islamic scholarship in medieval libraries that have been handed down, is something people aren’t aware of,” Jamal said.

Representing MSA in organizing this event, electrical and computer engineering Ph. D. student Rozana Hussin said that the lecture was an excellent primer for “someone who did not know much about African-American history or its connection to Islam.” She continued, “It was very engaging, and now I want to know more about the relevance of Islam to African-Americans. It really broadened my mindset.”

Jamal brought the lecture to a close by relating the contributions African-American Muslims made to various fields like literature, science, religion, and politics.