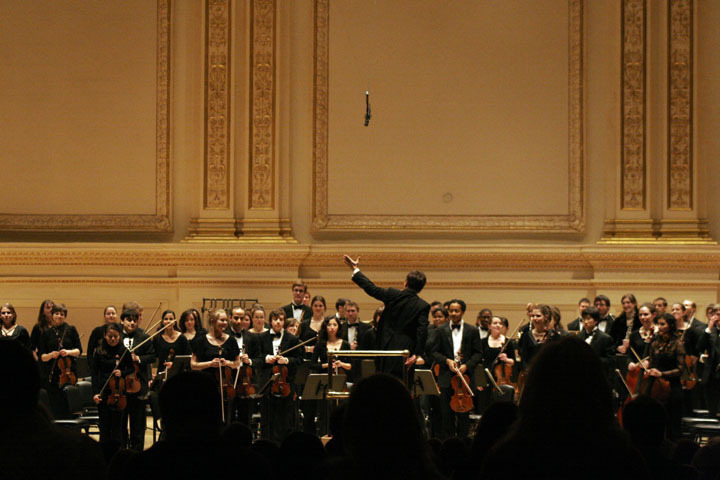 “My time will come.” Those were the words uttered by the great composer Gustav Mahler when confronted with fierce musical criticism during his lifetime. Nearly a century after his death, on the night of Jan. 30 at New York City’s prestigious Carnegie Hall, Mahler’s assertion seemed particularly accurate as the Carnegie Mellon Philharmonic Orchestra, conducted by world famous Carnegie Mellon alumnus, Keith Lockhart, poured their hearts and musical talent into Mahler’s First Symphony, “Titan.” Performing to a packed hall in the heart of American classical music New York City, it was hard not to be moved by the experience.

The performance began with a brief talk by the head of the School of Music, Noel Zahler. “Tonight is a night to celebrate,” Zahler said. Referencing the dramatic economic downturn experienced this past year, Zahler went on to highlight the importance of supporting the arts, particularly music. “At Carnegie Mellon, we make things,” Zahler explained. “We make music.” As the night wore on, it became apparent that this beautifully clear New York night was truly one of jubilation and triumph for the artistic expectation of excellence that the School of Music stands for.

The program opened up with a piece that was written to Lockhart’s young son by the conductor’s friend, Gabriela Lena Frank. Frank’s piece, “Three Latin American Dances for Orchestra,” provided a percussive and rhythmic introduction to the challenging program ahead. Moving from the 1970s to the late 1800s, the Pittsburgh Symphony Orchestra’s Grammy-nominated concertmaster, Andrés Cárdenes, performed a solo with the Carnegie Mellon Philharmonic on Édouard Lalo’s “Symphonie Espagnole.” Cárdenes made the five-movement musical workout look effortless with his magnificent violin playing.

After the violin solo, which was remarkably balanced with a present but not overbearing orchestral accompaniment, the stage was set, quite literally, for Mahler’s “Titan” symphony. The Carnegie Mellon Philharmonic’s concertmistress, Emma Steele, said, “I won’t be excited until I walk into the hall,” especially since everyone knows that to get to Carnegie Hall, a musician must “practice, practice, practice.” First-year music major and violinist Johanna Soderlund had a similar reaction, saying, “it’s overwhelming” to be playing at Carnegie Hall as “that is what you dream of as a little kid.”

Carnegie Hall is famous for improving the playing level of ensembles through its design and aura, and Carnegie Mellon’s Philharmonic was no exception with their brilliant and dramatic Mahler performance. Maestro Lockhart led difficult tempi transitions beautifully, particularly in the very opening of the piece and in the epic last movement. Lockhart’s terrific performance and ability to prepare the Philharmonic in a matter of days has made many in the audience and orchestra wonder if he is the music director the school has spent the last two years looking for.

The second movement, meant to sound like a lumbering waltz, seemed a little too disjointed at times, but oboist Jeffrey Marshak and horn player Jared Jodrey, a graduate student in music, graciously appreciated the light and nostalgic Trio section in the middle of the movement. Flautist Mira Magrill, a senior music major, provided wonderful solos in the first and fourth movements that are deceptively difficult and meant to be imitations of birdcalls. Perhaps the most impressive solo moment of the symphony, though, came in the ominous form of the children’s nursery song, “Frère Jacques.” Opening the third movement, bassist Sean O’Hara, a graduate student in music, performed the melody with ease, projection, and impeccable intonation. It is hard to believe that any orchestra would be less than content with O’Hara’s interpretation and performance of this famous bass line in orchestral literature.

If the theme of the night was celebration, then the climax came with the famous “Titan” ending, when the entire horn section and first trumpet player stood up while joyfully exclaiming the powerful motif and main melody of Mahler’s Symphony. This short but intensely effective motif is purposely taken from Handel’s “Messiah” when the chorus sings, “And He shall reign for ever and ever.” As the crowd leapt to its feet in ecstatic recognition and appreciation for Carnegie Mellon’s Philharmonic, it was clear that the School of Music’s time had truly come.