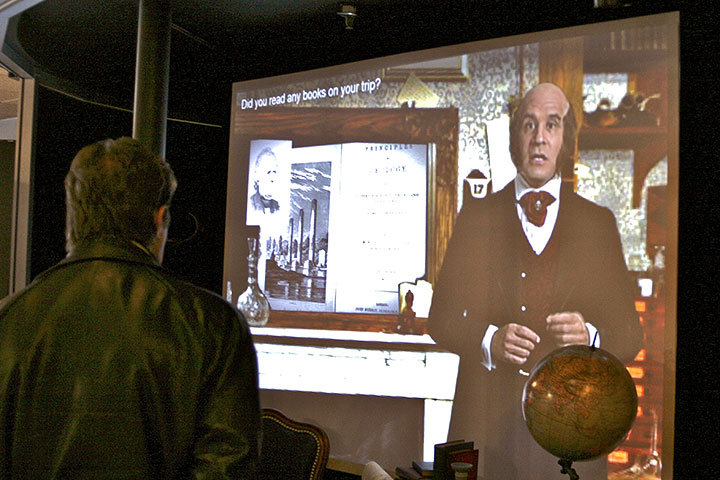 Visitors at the Carnegie Science Center can now ask Darwin questions via a new exhibit.

Unfortunately for those seeking counsel from him, Darwin is dead. However, for the occasion of the naturalist’s 200th birthday, a multidisciplinary team of biologists, computer scientists, and artists have resurrected the man — in the form of an exhibit at the Carnegie Science Center.

Charles Darwin’s avatar, portrayed by Carnegie Mellon drama alumnus Randy Kovitz, stands by the hearth in his home, clearly anxious for the interview to get underway. A console in front of him allows viewers to pose him any of a list of questions, covering topics from his voyage on H.M.S. Beagle to his family life, from his theory of natural selection to his religious views.
The answers come from primary sources, extrapolated from his many articles and journal entries. But some of the questions deal with subjects or events that Darwin could not have known about, and for these questions contemporary scientists are called upon to give their opinions.

The exhibit is the result of a collaboration between the Entertainment Technology Center (ETC) and Duquesne University. The exhibit uses Synthetic Interview technology developed by Scott Stevens, a senior systems scientist with the ETC and the Human-Computer Interaction Institute, and Mike Christel, also a senior systems scientist with the ETC.
The technology leverages a large number of prerecorded answers to questions. When a user poses a question, the system finds the most similar question in its database and plays back the corresponding answer.

This allows any person to have a mostly fluent conversation with a figure who, either due to a busy schedule or death, is inaccessible.
The advantage of synthetic interview technology over a simple video recording is that since the user controls the discourse, he can immediately address any questions that are bothering him. The end result, the creators of the technology believe, is a more satisfied user.

One of the creators of the exhibit is John Pollock, an associate professor in Duquesne University’s Bayer School of Natural and Environmental Sciences.
“People in the time of Darwin understood breeding through agriculture,” Pollock said. “Darwin’s insight was unique in that he came up with the mechanism of natural selection.” Before the contributions of Darwin and other naturalists, the large diversity of species had no satisfactory explanation.

Pollock’s work in the past has encouraged the observational instinct — the instinct that enabled Darwin to make his discoveries and that anyone can cultivate. Pollock helped in the planning of a garden in the Phipps Conservatory, which plants kale, cabbage, and Brussels sprouts together, laying bare to the eye the common ancestry of these household vegetables.
Recently, Pollock’s funding for these educational ventures stems from the National Center for Research Resources and the National Institute of Health.
According to a press release from the School of Computer Science, the Darwin synthetic interview is in the process of being adapted to the web. The creators also hope to bring further versions of the exhibit to other museums across the country.