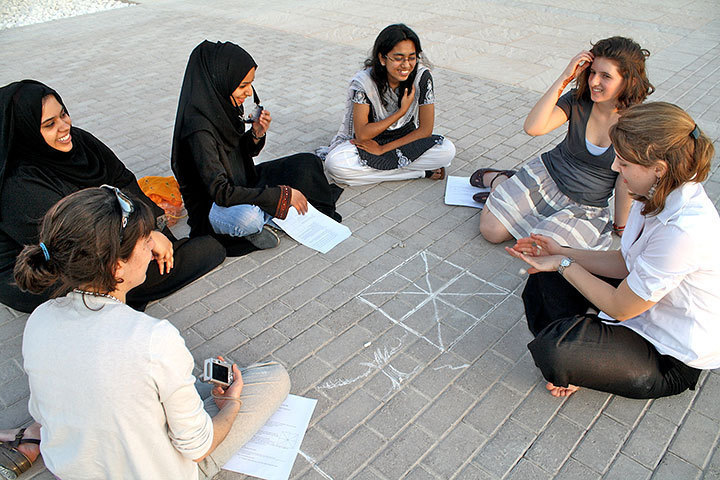 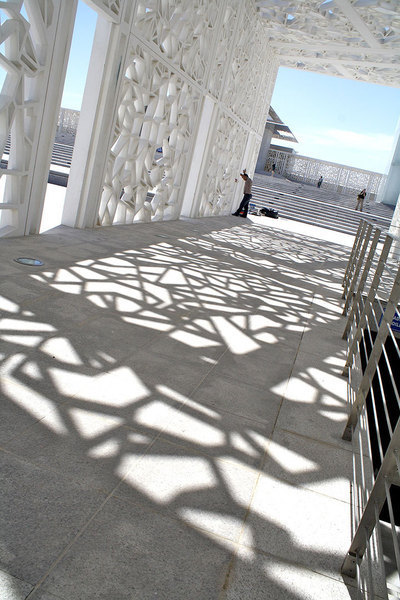 The ceremonial garden outside CMU-Q, in the center of Education City, is a picturesque place to visit. (credit: Caroline Kessler)

This is the thread that keeps weaving itself through explanations of our journey to Qatar, through descriptions of the people we met on Carnegie Mellon’s campus in Education City, and through the fast food restaurants with familiar logos that we saw.

I like to speak in the plural “we” about this experience because I wasn’t traveling alone to Doha to take classes and participate in extracurricular activities, as one might expect from a typical student studying abroad. Instead, I traveled with nine other students, of varying majors and years, including two graduate students. Together, we did take classes and participate in extracurricular activities, but not in the typical “we are all Carnegie Mellon students” sense. I had the opportunity to sit in on a class on the history of Islam. Although similar in subject matter to a class I took in the fall, Religion and Politics in the Middle East, the teaching style and classroom dynamic was completely different. There were only three students in the class — all female — and the professor didn’t lead as much of a discussion as might be expected from such a small class.

Despite the difference in classroom dynamics, we all carry heavy backpacks and the burden of the week on our backs. There’s always work to be done between classes, no matter what time zone we’re in.
We were lucky enough to take part in Qalta during our visit. Qalta is CMU-Q’s version of Summit, but it only took place in the evenings over a two-day period. The time and planning that the students put into this event was enormous. We learned a huge variety of things: how to make authentic tabbouleh, how to sword dance (only for the guys), how to belly dance (only for the girls), how to play some traditional Qatari games, and how to apply henna.

Obviously, the skills and insight the students gave us were very different from anything that might have been taught at our Summit. But there was a sincerity and sense of community that can be found on both campuses.

Throughout the week, we really got to know the students. CMU-Q is contained in one building within Education City, and their enrollment is about 200 students. The small size of the campus and the population made it feel like we had met most people by the end of the trip. The warmth and hospitality of everyone there was astounding. Perhaps this was because they are such a close-knit community and they were excited to meet their peers from Pittsburgh, but it also seemed like this was just a part of their culture, to welcome us into their school and, at the end of our visit, to welcome us into their homes.

The home and the family are central to Islam and Qatari culture. The three boys in our group were whisked away to the desert tents to roast meat, play cards and music, and smoke shisha. This is a common experience for men in the culture — to isolate a little from the rest of the world and race their cars over the dunes. Before the women in our group were split among three different houses, we gathered in one student’s palatial home. We met two of her sisters that were home and talked about the rest of her family, who were away. It was clear how central the family is, especially after she showed us a wedding album of photos from an older sister’s wedding.

More than Education City, what remains clearest in my mind is often not the adventures we had outside the gates of Education City — sand duning in the desert; relaxing by the Persian Gulf; exploring the Islamic Art Museum; wandering through Souq Waquif, buttered dough ball in hand; whizzing along the hectic streets of downtown Doha, through the ever-expanding construction — but the time we spent on campus with the students.

These other experiences definitely added a lot to the journey and gave me a clearer sense of what Doha is like. But the students, their voices, and their faces gave me the best sense of what CMU-Q really is. Their voices, stresses, and workload might be similar to ours, but there are differences, too — differences we can learn from and admire.