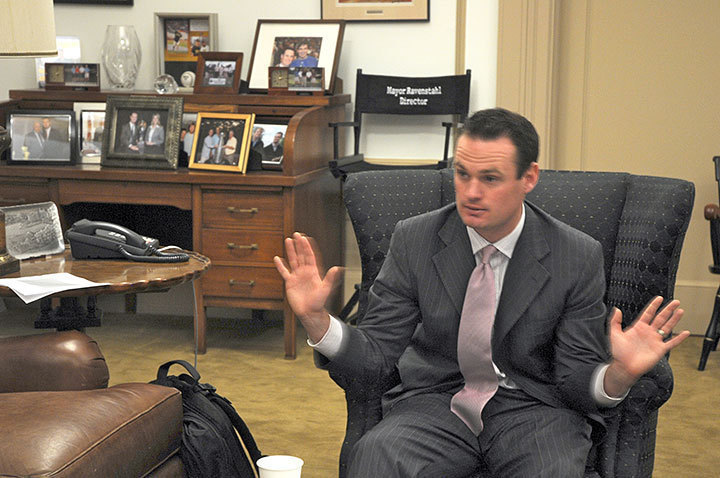 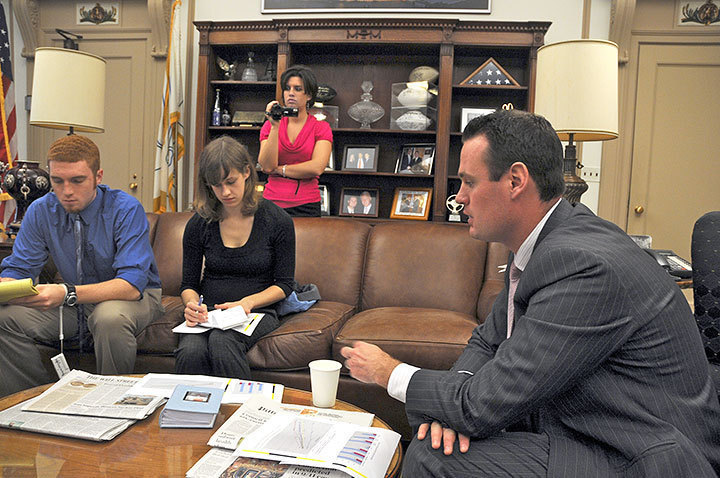 Ravenstahl tells student reporters that studying in Pittsburgh is one of the “privileges” that will be taxed if the mayor’s proposed budget is passed. (credit: Courtney Wittekind/Assistant News Editor)

“We will not rely on the revenue [produced from the tax] for 2010,” Ravenstahl told The Tartan at his office last Thursday. “We can band-aid it together.... At the end of 2010, though, we’ve got a very serious decision [to] make. We either need to find $15 million, or these cuts will happen. If they don’t happen, the city will go bankrupt. The black eye that Pittsburgh would receive, or the draconian cuts we would have to make … would not be a good thing for the institutions that reside within it.”

The comments came in the wake of the Intergovernmental Cooperation Authority’s (ICA) rejection of his tax. The ICA’s unanimous rejection of the budget on Wednesday ensured that the mayor would have to deliver a revised budget by Dec. 31.

His new proposal could not rely on the tuition tax for revenue in 2010; otherwise, the city could face state seizure of its funds.
Despite the ICA rejection, city council members Ricky Burgess, Darlene Harris, Jim Motznik, Tonya Payne, and Theresa Smith stood by the mayor at a Thursday press conference. “I think that our educational institutions have to participate,” Burgess told the Pittsburgh Post-Gazette. “They have to support our city, and to participate in funding the services that are given to all of our constituents, including their students.”

The mayor has also hired Joseph C. Bright, former chief counsel to the state Department of Revenue, “to add heft to its argument that a 1 percent levy on tuition is legal,” according to a Post-Gazette article last Wednesday. Mr. Bright claims the city will win the court battle to get the tax on the books for 2011, due to a state law that gives municipalities power to tax broadly defined “privileges.”

Post-secondary education administrators in Pittsburgh and nationwide continued to pile on criticism of the tax. Carnegie Mellon President Jared Cohon made his first public statement concerning the tax Friday. He listed Carnegie Mellon’s more than $1.4 million paid in taxes, fees, and services to the city annually and the more than 15,000 jobs the university creates as examples of the university’s contributions.

“At a time when Pittsburgh is trying to attract and retain young people, it should not become known as the only city in the U.S. to impose what is being called a ‘privilege tax’ on its students,” Cohon said. Ravenstahl told The Tartan that studying in Pittsburgh was one example of the “privileges” the city will tax.“It’s what we’re allowed to do, to act locally, and it’s that reason and that reason alone,” Ravenstahl said in response to a question about his framing of higher education in Pittsburgh as a privilege.

“If given the choice, there would be at least two options I would pursue: the $52 tax being raised to $144 on anyone who works in Pittsburgh; the second would be raising the payroll preparations tax to your institutions,” said Ravenstahl. Both measures would require changes to state legislation, which the mayor said he has pursued unsuccessfully for some time.

“I don’t disagree that there’s not a level of unfairness to this [tuition] tax,” he said, adding that, at the same time, city residents unfairly shoulder the burden of paying for city services. He claimed that his inability to extract more funds from commuters and non-profit institutions has forced him to target students’ wallets.

Students spoke out against the tax Friday, when 50 students attended a city council meeting downtown. Four students spoke at the meeting, their first opportunity to engage Pittsburgh’s lawmakers. Students have also set up a website at www.stoptuitiontax.org to organize their opposition, and many plan to attend city council’s public meeting about the tax on Nov. 30.

“The city’s current budgetary problems — the result of over 60 years of financial mismanagement — should not be placed on the backs of students working hard to better themselves,” said Student Body President Rotimi Abimbola, Student Senate Chair Aaron Gross, and Graduate Student Assembly President Patrick Gage Kelley in a formal e-mail statement of opposition last Thursday.
“How many consultants hired by the city have to tell the Mayor to cut or reduce underutilized services, before he stands up to city workers’ unions? Just because we’re not a strong voting bloc doesn’t mean he should get away with not pursuing other obvious solutions,” Erin Burns, a senior anthropology major and resident of the city said. “Not to mention the fact CMU’s 10,000 students would pay the most of any college under this tax. Where’s the proof that we consume more services than the 50,000 other students in the city?” Burns said.

As the controversy around the tax has grown, the city has attracted nationwide attention. USA Today covered the tuition tax last week, as did the national higher-education periodical Inside Higher Ed. The Inside Higher Ed article described recent attempts to tax revenues from higher-education institutions in Boston, Providence, and Berkeley. M. Matthew Owens, an associate vice president for federal relations for the Association of American Universities (AAU) warned 62 member institutions about 18 months ago of the coming wave of municipalities looking to tax higher education.

This topic across the country is “quietly brewing in university and college towns.... All eyes are on Pittsburgh to see how they handle this and whether it works,” said Kim Griffo, the director of the Clemson University-based International Town and Gown Association, in Inside Higher Ed.